Raven Rock Was Once Bool’s Island

Note:  This article was written by Egbert T. Bush, not by me. I have only added some footnotes for clarification and the photograph of Raven Rock Station, which was not part of the original article.

END_OF_DOCUMENT_TOKEN_TO_BE_REPLACED

This was the last article published under Mr. Hoppock’s name. He died on October 29, 1906, at the age of 68. The article was first published on this website ten years ago (2011). In reviewing it I have found many things of interest to add. I have also added headings to make reviewing easier and brought the footnotes into the text.

END_OF_DOCUMENT_TOKEN_TO_BE_REPLACED

Story of Green Sergeant’s Bridge and Its Builders

Hunterdon County was once well supplied with covered bridges.  Now the lonely last one stands at what has long been known as “Green Sergeant’s Mills.” Some say that there is no other such bridge in New Jersey today. I cannot vouch for that; but the covered bridge is almost a thing of the past.

END_OF_DOCUMENT_TOKEN_TO_BE_REPLACED

The Stories Told In Bygone Days

For the stories of the wildwood
Of the mountain and the plain
(Any stories heard in childhood)
Are the stories that remain.

Yes, the stories that were told us seventy years ago still come up in quiet hours to rouse the drowsy mind and stir the sluggish blood. Some scattering ones that do not seem to fit well in any particular place may recall fond memories in older people;  and may be of more or less interest now and then to one of the younger generation, not for themselves but as inklings of the older times. Present conditions are not calculated to make them as vivid as when memory recorded them so long ago; yet perhaps enough may be depicted, even by a limping pen, to give a fair idea of things then made so clear, often quite thrilling and always interesting. END_OF_DOCUMENT_TOKEN_TO_BE_REPLACED 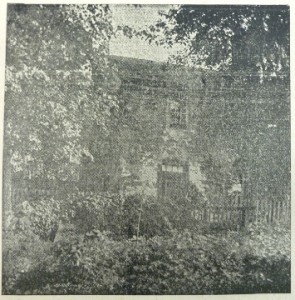 The above view of this old mansion now standing on the farm of Manning Dilts in Raritan Township, at the top of what is known as Buchanan’s or Dilley’s Hill, built in 1725, making it one hundred and seventy-six years old, was recently photographed by Mr. J. C. Sunderlin of Flemington.1  From this elevation the eye has a view of the Raritan valley as far east as Bound Brook. Also from this point a view can be had of the Sourland Mountain range from the Delaware on the west, extending through the counties of Hunterdon and Somerset, presenting to the view a greater scope of country than can probably be seen from any other point in the county. END_OF_DOCUMENT_TOKEN_TO_BE_REPLACED

This old building, erected in 1758 at Head Quarters, now Grover, standing on the corner of the road on the farm at present owned by Smith Skinner, was, between the dates given above, used as a recruiting station.1  As shown by papers in possession of the writer, Captain David Jones, of the Continental line, was the recruiting officer, and at this point, when the alarm was given that the then hated minions of King George had made a landing at Paulus Hook (Jersey City) or Amboy, would assemble the patriotic old citizen-soldiery, armed with the flint-locks, home-made bullets and powder horns, and from thence hasten to the front to assist the great Washington in beating back the invaders.2 END_OF_DOCUMENT_TOKEN_TO_BE_REPLACED

END_OF_DOCUMENT_TOKEN_TO_BE_REPLACED

I intend to publish the articles written by J. M. Hoppock, with commentary in footnotes, but thought it wise to begin with his obituary, so that readers can get an idea of who he was. The obituary itself is a marvel, redolent of the turn of the 20th century in its phrasing and perspective. END_OF_DOCUMENT_TOKEN_TO_BE_REPLACED

The Magic of Myths

In my last post I wrote about the durable story that George Washington visited with John Opdycke and that, as a result, the village where Opdycke lived took on the name of Headquarters. Some people will read that sentence and conclude that it happened and is not a myth. They will ignore that phrase “durable story.” END_OF_DOCUMENT_TOKEN_TO_BE_REPLACED

In Days When The Great Fire Up The Chimney Roared

Fireplace Was the Center of Family Life and Activity;
Chimney Sweeps Common

Mr. Bush has good advice for those of us who enjoy a warm fire in winter. Note that the illustrations were not included with the original article.

“The great fire up the chimney roared.”  Indeed it did, and how could it be otherwise? There was so much of greatness around that fire that it could not help either being great or roaring with its own greatness and that of its surroundings. That fire was not built on the economic Indian plan: “Injun make little fire—go close by;” but rather according to the Indian’s description of the uneconomic way of the paleface: “White man make big fire—go ‘way off.” END_OF_DOCUMENT_TOKEN_TO_BE_REPLACED