The Town of Clinton Is Born

Clinton Began As a Speculative Venture

The history of the town of Clinton is a fascinating one. The borough has so much character and charm, but it had a rocky start.

END_OF_DOCUMENT_TOKEN_TO_BE_REPLACED 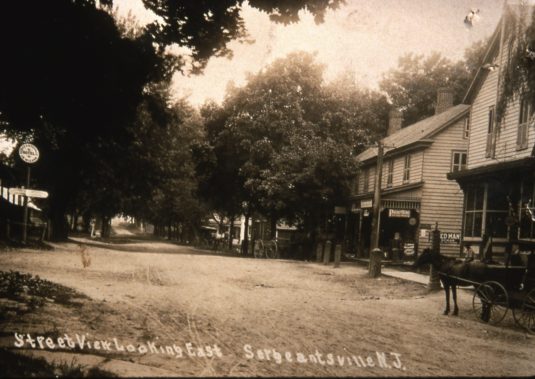 While working on a history of the Sergeantsville Inn, I realized that this would be a good time to publish Egbert T. Bush’s article about the places that made Sergeantsville such an interesting little town. Mr. Bush did not have the advantage of adding photographs the way I do. These pictures come from the postcard collection of Paul Kurzenberger. (Note that Mr. Bush’s article is in italics; my comments are not.)

END_OF_DOCUMENT_TOKEN_TO_BE_REPLACED

Giant Oak Caused Trouble Before It Arrived at the Mill.
A Big Event in the Town

This is another in a series of articles by Egbert T. Bush on the subject of Hunterdon County trees. Whenever Mr. Bush writes about an event, there is always an interesting back story—often more than one. This article about Stockton takes us north to Kingwood and Alexandria, and south to Lambertville. There are a few people of particular importance: John Finney, William V. Case, Edward P. Conkling and his father Rev. Cornelius S. Conkling. The biographies of Finney and Case can be found at the end of Mr. Bush’s article. The Conklings will appear in a subsequent post.

END_OF_DOCUMENT_TOKEN_TO_BE_REPLACED

The Tanner of Skunktown: Peter Prall

On Saturday, June 15th, a large group of people gathered to follow Dennis Bertland on his walking tour of Sergeantsville. It was fascinating and fun. Dennis showed us how the village evolved from its earliest days. And it was great to see so many people with memories of old Sergeantsville. Towards the end of the tour the subject of Skunktown came up. Sue Lockwood told a story about its origin (there are several versions; see What’s In A Name). She said the name came from the fact that there was once a tanner here who sold skunk pelts. I’ve heard that before, but this time I got to thinking. END_OF_DOCUMENT_TOKEN_TO_BE_REPLACED

What It Takes To Raise A Village, Pt 2

This is another long post; it is the rest of a talk I gave in 1997 on Delaware Township villages (part one can be read here). Part two focuses on the villages in the 19th and early 20th centuries. There is far more to say about them, which I will attempt to do in future posts. Currently I have been researching the history of Raven Rock, which you can read about here and here. END_OF_DOCUMENT_TOKEN_TO_BE_REPLACED

What It Takes To Raise A Village, Part One

The following is an update of a speech I delivered at the Locktown Stone Church in May 1997. I thought it would be a good idea to archive the speech here on my website, especially since it makes a nice short history of Delaware Township. When I gave the speech, I had two large maps showing locations of mills, taverns, ferries, the oldest roads. One map showed the 18th century version of Delaware Township, and one showed the 19th century version. Whatever happened to those maps?  If I find them, I’ll turn them over to Marilyn Cummings who has been working hard on just such a map project, one that can be seen on Google Earth. END_OF_DOCUMENT_TOKEN_TO_BE_REPLACED

One way to kill time is to browse the census records for oddities. While looking at occupations in the 1880 census, I found something definitely out of the ordinary. It was on the page that covers the Village of Stockton, which was still a part of Delaware Township at the time. There, among the farmers, farm laborers, and craftspeople of all sorts, were brothers John and Uriah Larue, whose occupation was listed as “never knew how to do anything.” Really–that’s what it says. It was also noted that they had not been employed for the past 12 months, and were boarding with Isaac and Sarah Larue. Isaac, who worked as a laborer, and Sarah were both 29, and had three daughters. Uriah and John were 37 and 40 years old, respectively.

The brothers could have been paupers, but paupers were poor people who had no family to take care of them. I believe that John, Uriah and Isaac were the sons of Asa Larue and wife Rachel, who appeared in the 1870 census, Asa being a 51-year-old wheelwright with only $300 of property. He must have died before 1880. His sons John, Uriah, Isaac and Wilson were all working on his farm. But apparently John and Uriah (who were 25 and 24 in the 1870 census) did not learn anything from it.

In Days When The Great Fire Up The Chimney Roared

Fireplace Was the Center of Family Life and Activity;
Chimney Sweeps Common

Mr. Bush has good advice for those of us who enjoy a warm fire in winter. Note that the illustrations were not included with the original article.

“The great fire up the chimney roared.”  Indeed it did, and how could it be otherwise? There was so much of greatness around that fire that it could not help either being great or roaring with its own greatness and that of its surroundings. That fire was not built on the economic Indian plan: “Injun make little fire—go close by;” but rather according to the Indian’s description of the uneconomic way of the paleface: “White man make big fire—go ‘way off.” END_OF_DOCUMENT_TOKEN_TO_BE_REPLACED