This is the third in a series of 5 or 6 articles on the Fox family of Rosemont and Kingwood.

1. The Quaker George Fox; and a postscript
2. George Fox of Hunterdon County

Before Fox sold the 284 acres northwest of Rosemont, he had a visitor from England who died of ship’s fever, according to a story told by John Lequear.1 He was buried in the southeast corner of this tract of land, and after the burial, a quarter acre was set aside for future burials. That quarter acre has since become the Rosemont Cemetery, the largest cemetery in Delaware Township. People from both Kingwood and Amwell (Delaware) Townships are buried there. 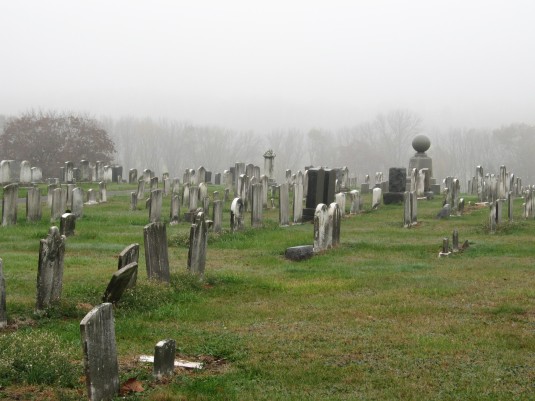 I assume that Lequear was relating a local tradition. However, there were members of the Fox family buried in the Rosemont cemetery. Undoubtedly the earliest stones are long gone. These remain:

This last George Fox was the grandson of George Fox and Mary (Wolverton?); Edward was his son, and Dinah was Edward’s wife.

In the late 1720s, George Fox was called on to make inventories for local estates: 1727, for Richard Caine dec’d of Amwell; 1728, for John Cumfort dec’d of Amwell; 1729, for Alexander Day dec’d. He made this last one with Charles Wolverton, the son of Charles Wolverton and Mary Chadwick. In 1732 he witnessed the will of Samuel Allen along with John Carr, Samuel Green and Charles Wolverton. In 1742, he and Henry Kitchen made the inventory of Stephen Pitcock. I believe, and have no proof of it, that it was the younger George Fox, the one born in 1700, who was making these inventories.

Exactly where George and Mary (Wolverton) Fox lived I cannot say for sure. I believe that his father probably lived on the property northeast of Rosemont, it being the property purchased from Charles Wolverton in 1719, and that the son lived there too for perhaps 10 years before moving to Kingwood. It is notable that all of the people whose wills he witnessed or whose estates he inventoried lived in Amwell. [Note: For a description of how Amwell Township was divided into three townships in 1838, please click on the topic “1838” in the right-hand column, or visit the Index of Articles page.]

George and Mary Fox had 8 children in all:

The father, George Fox (b.1700) was a yeoman farmer and, according to his will of 1754, a mill owner . Whether or not Fox sold his Amwell tract in 1727 or later than 1733, he probably did it before purchasing a tract of land in Kingwood. On May 14, 1746, he bought 300 acres from Mary Olive Stanbury. According to John Lequear, the property lay to the east and north of the old Kingwood hotel on Route 519.2 It appears that George Fox sold off part of his 300 acres as soon as he had purchased it. According to Lequear, he sold off 76 acres to Joshua Waterhouse in 1746; Snell wrote that the property was “about a mile east of Kingwood tavern.”3 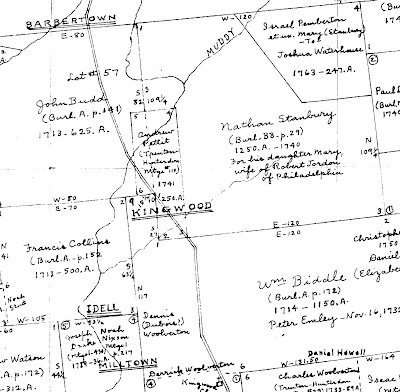 (For a larger view, just click on the map. When you’re done, click on your browser’s previous-window button.)

The Farnhams state that the mill belonging to George Fox was located near Milltown in Kingwood,4 and that a new mill was built upstream by Samuel Runk in 1796. Since the tract of land that Fox purchased from Mrs. Stanbury was located east of Route 519, and Milltown is west and south of this land, we must assume that Fox had acquired additional land without recording the deed.

The will of George Fox, yeoman of Kingwood, will be discussed in the next post.