That is how Dr. Daniel Coxe was described in 1670 by Christopher Merrett in a pamphlet on the “Frauds and Abuses Committed by Apothecaries.”

It appears I have gotten my chronology wrong. The last post on Dr. Daniel Coxe concerned his early medical career, which began in 1669, when he was licensed at Cambridge to practice medicine. It had been my impression that Coxe was a medical man first, and a scientist second. But I now realize that his scientific experiments pre-dated his medical profession.

Frank H. Ellis wrote that Coxe became interested in “the new science” while at Cambridge [1], so perhaps his scientific experiments took place while he was also studying medicine. His experiments must have been noteworthy enough to attract the attention of The Royal Society for Promoting Natural Knowledge, which was founded in 1660 by Christopher Wren, Wm. Petty and others. Charles II gave it a royal charter, because he found “the new science” extremely entertaining [see Zimmer, Soul Made Flesh, p. 183-185]. Some of the original members were from Cambridge, and may have been aware of Coxe’s scientific interests. There were also several physicians among the early members.

Daniel Coxe was elected a Fellow of the Royal Society in March 1665, four years before becoming a physician. It is true that some of the Society’s members were not scientists but high-ranking nobility. Daniel Coxe’s father was a Gentleman, but, without documentation to prove it, I am of the opinion that Coxe was admitted on the basis of his scientific interests, which he demonstrated on May 3, 1665 before the Society at Gresham College in London. 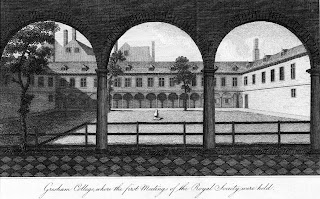 drawing of the courtyard of Gresham College, London, by Nehemiah Grew (1641-1712) 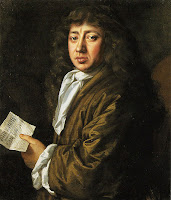 Samuel Pepys (shown left) was present at the demonstration, and recorded the lecture in his diary; Pepys did not name Daniel Coxe, but only referred to him as “one of the Society.” According to Pepys, Coxe poisoned a cat with tobacco oil. I suspect Pepys was more interested in the cat than the ill effects of tobacco.

“Mr. Daniel Coxe read an account of the effects of tobacco-oil distilled in a retort, by one drop of which given at the mouth he had killed a lusty cat, which being opened, smelled strongly of the oil, and the blood of the heart more strongly than the rest …. One drop of the Florentine ‘oglio di tobacco’ being again given to a dog, it proved stupefying and vomitive, as before” [2].

Daniel Coxe is often credited with being the first to show the ill effects of nicotine through his experiments. So I expected to find him featured in the book titled Tobacco by Iain Gately (NY: Grove Press, 2001). Not so. Not only was there no mention of Coxe, but Gately did not describe any scientific inquiry into the ill effects of tobacco until the early 1800s. Coxe seems to have been way ahead of his time, and out of tune with his countrymen. Gately wrote:

Curiously, the English did not make any connection between smoking and the recent discovery of the purpose of human lungs, which had been made by William Harvey as a part of his explanation of the function and circulation of the blood [pg 96].

What Gately did describe was the popularity of tobacco in England during and after the Great Plague of 1665. It was considered to be protective against the deadly disease. According to Pepys’ diary, the plague did not appear in London until May 24, 1665, and did not enter “The City” (the area around the Bank of England) until three or four weeks later. So Coxe’s demonstration took place before the plague hit.

[2] Birch’s “History of the Royal Society,” vol, ii., pp. 42, 43]. Although Coxe read from a paper, he apparently did not publish his findings. The first issue of the Royal Society’s Philosophical Transactions was March 6, 1664/65, and there is nothing by Coxe in the first volume on the effects of nicotine.