The Mills of Delaware Township

June 2, 2010 By Marfy Goodspeed in Delaware Township No Comments Tags: "The Post", mills

This article is similar to the previous article, “Delaware Township Villages and Mills,” but just different enough to be allowed in the archive. Gradually I will collect here all my published articles on Delaware Twp. mills.

Delaware Township, like all the other communities in Hunterdon County, was once powered by water. All of the creeks and streams were put to use for mills of many kinds. The Wickecheoke and its tributaries, the Lockatong, and the Alexauken Creeks, Plum Brook and Sand Brook, and the branches of the Neshanic were all providing power for mills in the 18th and 19th centuries. 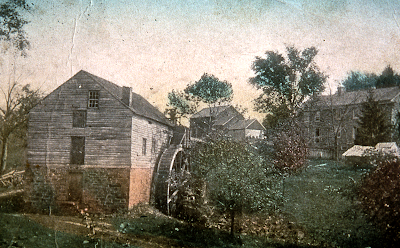 Green Sergeant’s Mill, as seen from the north, taken from an old postcard

Many years before 1838, when Delaware Township was created by the New Jersey Legislature, settlers in this area were residents of Amwell Township, which included today’s Raritan, Flemington, East and West Amwell, Stockton and Lambertville. The first families in Amwell managed to be self-sufficient in most things, but to grind grain, full cloth or press oil required more equipment than ordinary farmers had. The earliest settlers of West New Jersey had to grind their grain with hand mills or pound their corn with a mortar and pestle in the Lenape style. The next step up was to use an ox, horse or mule to turn a grinding wheel. Water mills, using overshot or undershot wheels, came next, as soon as the machinery could be imported and the wheels and buildings constructed. The first mill in West New Jersey was built about 1680 by Mahlon Stacy at Trenton.

As the need for mills was great, local millers took every advantage of the several creeks running through the township. In 1840, Barber & Howe, in their Historical Collections of the State of New Jersey, found six gristmills, six sawmills, and one oil mill in Delaware Township. Hubert G. Schmidt wrote that the Wickecheoke supported “at various times . . . four grist and flouring mills, six sawmills, an oil mill, a fulling mill, and a number of clover hulling mills.”

The oldest mill was Daniel Howell’s mill at Prallsville, which was probably built about 1710.  Another very early mill was the Kitchen Mill at Sandbrook. The earliest dated mill in Delaware Township was constructed at Headquarters by John Opdycke or his brother-in-law Benjamin Severns in 1735. It was rebuilt in 1754 by John Opdycke and in 1876 by John Carrell. It remains a beautifully built and sound structure, whereas nearly all the other 13 mills are gone, excepting the much-changed mill at Prallsville, the sawmill on Strimple’s Mill Road and the Rittenhouse Mill on Old Mill Road, the latter being converted to a residence. The mill on Strimples Mill Road (below)  is the only one left that is still in operation. 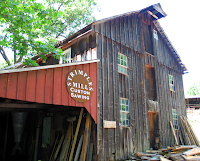 There were other kinds of mills besides sawmills and grist mills. In fact, the meaning of ‘grist’ changed as the area became more settled. At first it meant anything produced by grinding grain. But later it came to mean the coarse feed used by livestock, while flour mills made the finer textured product required for good bread. Amwell/Delaware had lots of grist mills, but in the earliest days, flour mills were scarce and required traveling to places like Ringoes and Pittstown.

There were oil mills that ground flaxseed into linseed oil, while the residue or oil meal was fed to cattle.  Plaster mills ground lime into plaster dust. There were also a few clover seed mills. Clover seed needed to be separated from its husk, which was a very dusty business if done by hand. Millstones could rub the husks loose and fanning machines blew away the chaff.  Clover mills were basically fanning mills, which were designed to blow the chaff off of any sort of grain. Fanning mills can be found in some farmers’ inventories.

Most of the early tanneries had their own bark mills, which crushed and ground oak bark to be used in the tanning process. Fulling mills hammered newly woven woollen cloth until it had shrunk and felted enough to hold its shape. There were very few fulling mills in Amwell Township; one of them was Green Sergeant’s mill. In 1837, Mr. Sergeant also advertised his picking machine, which pulled fibers apart and cleaned them, and a carding machine, which pulled the fibers into long rows. By the middle of the 19th century, fulling mills were scarce in Hunterdon County. For more information on old mills, look for–