Three of a Kind

Recently I got a chance to look through Paul Kurzenberger’s postcard collection and found this gem: 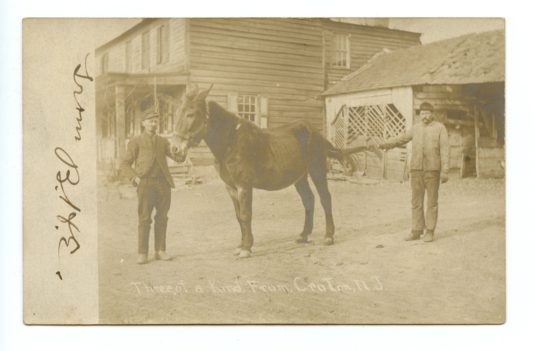 It was too funny not to scan and save. As you see, the caption reads “Three of a kind, from Croton, N.J.” After my chuckles subsided, I began to wonder who in Croton sent this postcard, and who received it.

If you look closely along the side you can see it says “From B. H. E.” It did not take me long to suspect this was a member of the Ellicott family who were prominent in the Croton area. Those initials made me think of Benjamin Harvey Ellicott who married Mary Ann Warford, daughter of Elisha Warford, in 1838.1

The date is too early, so a little more research brought me to:

He was born in 1878 to George Washington Ellicott and Sarah M. Baker, which makes him a grandson of Benjamin Harvey Ellicott and Mary Ann Warford. Although Benjamin and Mary Ann married on February 22, 1838 in Baltimore, they were slow to start a family. Their first child was not born until 1848. Their fifth and last child, George W. Ellicott, was born November 1858 in Maryland.

In 1861, as the Civil War intensified, the Ellicott’s left Baltimore for the safer neighborhood of Locktown. But Mary Ann was missing her old Baltimore doctor and her friends, so they moved back for a short time, and then returned on August 18, 1863. By then they were committed to remaining, and Benjamin Ellicott began work on renovation of Elisha Warford’s house, to accommodate his family. But soon after that he contracted typhoid fever and died at the age of 54. This left Mary Ann a widow with three children (two of her five had died young). She remained with her father in Croton until his death in 1872. He made generous provisions for his daughter and her children in his will, including to grandson George W. Ellicott:

to my grandson George W. Ellicott the farm now occupied by Jacob Lake; . . . in the township of Delaware, . . . to be rented out by my executors until the legatees shall respectively arrive at the age of 21 and the rents to be paid to my daughter Mary Ann Ellicott for the maintenance and education of sd legatees; and if any should die before reaching 21 years and no lawful issue, the farm to be equally divided between the survivors;

. . . that certain farm or plantation in Franklin township of 80 acres being the same purchased by me of William Eicke now occupied by Jonathan Eick, adjoining John Trimmer and others; also one of my Brick houses known as No. 4 in a Block of houses in Lambertville in the Hook, etc.

Mary Ann Warford Ellicott was a very wealthy woman following the death of her father. Not only did she inherit most of his property, she was trustee for all the properties he left to her children. The map of 1851 shows her name, often written as “M.A.W. Ellicott,” all over the area surrounding Croton. She was 57 years old at the time, and survived her father by twenty years, dying on February 26, 1892, when she was 76 years old. She did not leave a will.

When his mother died in 1892, G. W. Ellicott was 34 years old. He had married his wife Sarah M. Baker (daughter of Peter H. Baker and Matilda Dilts of Quakertown) on December 24, 1877, and they had only one child: Benjamin H. Ellicott (sender of the postcard) the next year. Thanks to his inheritance, G. W. Ellicott was a wealthy man. But he was not a lay-about. He actively pursued a nursery business. In 1876 he advertised in the Hunterdon Republican:

“ELLICOTT & NIXON have at their Nursery, 1 mile south of Quakertown, 60,000 Peach Trees, as fine as the State can produce, comprising 20 varieties. The buds were cut with care from good, healthy trees.”

“George W. Ellicott, of Croton in Delaware Tp., has 30,000 peach trees set out. When they all come in bearing, he will be one of the largest peach growers in the State.”

Despite his wealth, things did not always go smoothly for Mr. Ellicott. In 1898 he was sued by Sarah G. Brown and several of his properties were seized and sold at public auction by the Sheriff.2

Benjamin H. Ellicott was living with his grandmother Mary Ann W. Ellicott in 1880 when he was one year old. In 1900, George W. and Sarah Ellicott had their own household, and Benjamin H. was 21 years old, working as a farmer.

By 1930, George W. Ellicott had become known as a very successful antiques dealer. He had a barn filled to the brim with very valuable items. But it all went up in flames in 1931, which must have been devastating. But he was still practicing that occupation in 1940, when the census listed him and wife Sarah living with their grandson Warren Ellicott and his wife Rachel. Warren was the first child of Benjamin H. Ellicott and a wife I have not yet identified. She died before 1912 when Benjamin H. Ellicott married his second wife, Elizabeth Case (1886-1941). She was the daughter of William W. and Elizabeth Case.

Perhaps 1907, the date of the postcard was not long after the first wife’s death. Why Ellicott decided to send this funny picture to Miss Evona Ewing is a bit of a mystery. 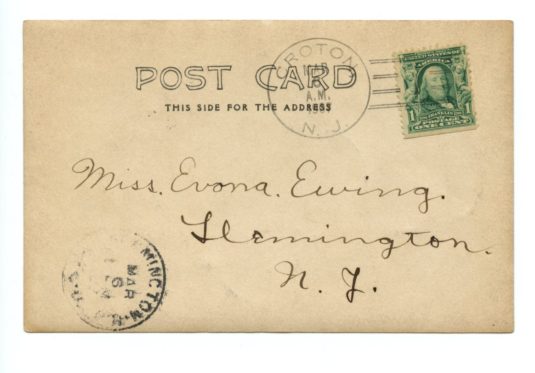 Evona or Evana Ewing was born July 1892 to Judiah Higgins Ewing (1848-1909) and Josephine Bellis (1851-1909) of Raritan Township. It is possible that this family was living near Croton, which is located partly in Delaware Township and partly in Raritan. (I have not researched their property.) I have not been able to find any further information on Miss Ewing—all I know of her is her appearance in the 1900 census for Raritan Township. You’d think with such an unusual first name it would be easy to learn more of her, but the abstracts of the Hunterdon Republican (my go-to source) end in 1900, and Ancestry.com is no help either.