A note on dates:

During this period, the new year began on March 25th, which meant that events that occurred in January and February were given the previous year’s date. Jan. 15, 1674 (old style) would be Jan. 15, 1675, according to our calendar. Quaker usage gave the month by number, so Jan. 15, 1675 (in modern form) would be the 15th day of the eleventh month, 1674. I think there is a good reason for giving dates that fall between Jan. 1 and March 24 in what is called Old Style and New Style, for instance, Jan. 15, 1673/74. It is somewhat cumbersome, but it alerts the reader to the pay attention to the year. One can get very seriously confused otherwise. In previous posts, I usually converted the date to modern usage. Today I’m turning over an old/new leaf.

In the last post I mentioned that the Dutch had briefly retaken New Netherland, only to give it up again in 1674. Following this development, James Duke of York decided that he needed to get better control over his New World colonies, so he began by appointing Edmund Andros to be governor of New York, with the immediate goal of converting New Netherland back into an English royal colony.

The trouble between Andros and the Jerseys can be traced to the commission that James Duke of York issued to Andros on July 1, 1674, in which he neglected to mention that the Jerseys had been granted to Carteret and Berkeley. Andros presumed he had full governmental authority over the provinces, which Gov. Philip Carteret of East New Jersey disputed as best he could, much to his regret.

This was part of a process that began after the English reclaimed their North American colonies. Everyone felt obliged to reconfirm their titles and patents, starting with James’ original charter from his brother King Charles. The New Jersey patentees, Carteret and Berkeley also needed re-confirmation, and on July 23, 1674, Carteret got his. But James neglected to confirm the grant to Berkeley. This was probably because Berkeley had by this time sold his share to a Quaker, Edward Byllinge, and it is thought that by postponing the patent to Byllinge, James was expressing his disapproval of the Quakers. On the other hand, it might have simply been due to the confusion of Byllinge’s affairs. Or perhaps it was because Berkeley was in no position to sell his share to anyone. Legal folks can spend hours debating who had rights to the land and government of New Jersey. The fact is that Berkeley sold out to Byllinge on March 18, 1673/74, little more than a month after the Treaty was signed with the Dutch, and without any reference to the state of his charter. Perhaps Byllinge knew there was a cloud on his title and chose to take a gamble.

Back in New York, Gov. Andros had no reason to doubt he was also in charge of West New Jersey. Remember that at this point there were only small settlements of English and Dutch in East New Jersey, Carteret’s province, and even fewer English, Dutch and Swedish settlers along the Delaware Bay, mostly on the western side of the river. The Quaker migration to West New Jersey had not yet begun. To the extent that Andros governed the Delaware Bay settlements, he relied on his outpost at New Castle.

After living in New York for three years and dealing with the effects of King Philip’s War (1675-77), Gov. Andros planned to return to England late in 1677 to spend the winter in a more congenial climate. But before he could leave, a boatload of Quaker settlers showed up in the ship ‘Kent’ under the impression that they were going to establish a Quaker colony on the Delaware River. Andros did not like the idea but gave them leave to settle there under his government. He did the same for the ‘Martha’ from Hull. The Quakers did not like the idea of being governed by Andros, but decided to go ahead, under protest, and paid the customs duties Andros imposed as governor of New York on all ships entering the Delaware Bay. These customs duties remained a sore point between New York and New Jersey for years to come.

I wonder if Gov. Andros got back to England in time to attend the royal wedding. On November 4th, Mary Stuart, the daughter of James Duke of York and his first wife Ann Hyde, married William of Orange. The consequences of this marriage are hard to overstate for New Jersey, and for that matter, for England. And while we’re at it, don’t forget the name Hyde. That one turned out to be a big deal too, in the person of New Jersey’s first royal governor in 1702.

By the time Andros returned to New York in 1678, more ships had landed at Burlington with hundreds of new settlers, many of them Quakers. Indian purchases had been made and a provisional government established. Andros must have learned something about the Quakers while he was in England, because in October 1678 he ordered that the inhabitants on the east side of the Delaware River were not to be disturbed in the possession of their lands. But he still seems to have had governmental designs on the Jerseys.

More About the Tenths

In my last post I talked about the earliest political divisions in West New Jersey. These early divisions were the “Tenths,” which were designed to give some order to the settlement of the new colony. The original plan, laid out in the Concessions and Agreements, was for an assembly of ten members from each Tenth, for a total of 100 members. But the Tenths never got to ten.

Each Tenth was to have frontage along the Delaware River, from Assunpink Creek down to Salem, with major creeks serving as boundaries. In practice there were only four “Tenths” plus Fenwick’s colony at Salem. It is a challenge to imagine these locations. Those with access to John P. Snyder’s The Story of New Jersey’s Civil Boundaries can sort it out. But I wanted a map that served my own purposes too, so I took the liberty of adapting Snyder’s maps to get a sense of what settlement there was in West New Jersey in the 1680s and 90s. 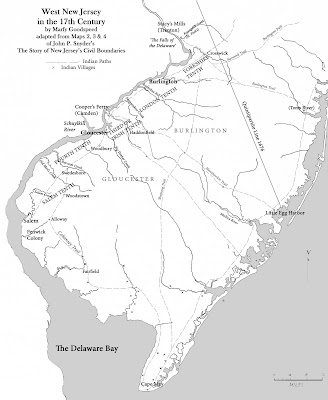 Click on the map to get a better view.

During this period, from the first arrivals in 1677 to 1680, the focus was on settlement and land distribution. What governing there was was done by the commissioners, but we have no record of their deliberations. Some of the settlers wrote letters home describing life in the new colony, which were reprinted in Samuel Smith’s History of Nova Caesaria. One of these was Mahlon Stacy who had 100 acres surveyed at the Falls of the Delaware (the future Trenton) in 1680. Stacy was one of the original five Yorkshire proprietors and came to West New Jersey on the ‘Shield’ with Richard Green.

In April 1680, he wrote to his brother in England about life in West New Jersey, praising the fertility of the soil and abundance of wildlife. Already there were orchards so successful that the trees were being killed by the weight of the fruit. Cider was being made and the peaches were delicious. As for wild fruits, Stacy was particularly taken with the cranberry, a fruit that was new to the English. And yet by 1680 they were already making a cranberry sauce to serve with turkey. He does not talk about that interesting bird, the wild turkey, as anything special. The settlers also were eating ducks, geese, pheasants, and partridge. Stacy was delighted with the way cattle, pigs and sheep fattened up on the native grasses. He also enjoyed fish from the Delaware, remarking on large “shoals” of herring they learned to catch in the Indian fashion. The fish that were new to him were catfish, shad and sturgeon. He concluded: “for my part I like it so well, I never had the least thought of returning to England, except on the account of trade.”

Trade is not something I was expecting at such an early date. In another letter also written in April 1680, Stacy described how he and eight others bought and fitted out a ‘ketch’ of 50 tons and sent it to Barbados, where the cargo was sold, and other goods taken aboard and brought back to Burlington. As Stacy wrote: “We have wanted nothing since we came hither, but the company of our good friends [back in England].” He wrote that those who come will find things much easier than those who first arrived, “before the country was settled as it now is.” The thought that in only three years a few hundred people could make a place seem ‘settled’ is amazing.

Next Post: The exciting year of 1680 and its aftermath. In fact, the years 1680 through 1703 were all exciting in their ways. It was a strange time to be living in New Jersey.

Some Sources: The best source for happenings in early West New Jersey is Samuel Smith’s The History of the Colony of Nova-Caesaria or New Jersey, 1765 (reprint 1975).

A couple of good later histories that cover this early period are Wesley Frank Craven, New Jersey and the English Colonization of North America (Princeton, NJ: Van Nostrand, 1964); Edwin Platt Tanner, The Province of New Jersey 1664-1738 (New York, 1908); and the Pomfret books (Colonial New Jersey (1973), The New Jersey Proprietors and Their Lands (1964), and The Province of West New Jersey (1956)).

Major Corrections were made to the original post on Dec. 18, 2009 (much to my chagrin): There were several errors, based on my mistaken assumption that the Dominion of New England began in 1674, when in fact it was not created until 1686 after James Duke of York had been coronated James II. In 1674, Edmund Andros was appointed Governor of New York only. In 1674, Rhode Island and Providence Plantations, Connecticut, Plymouth Colony, Massachusetts Bay Colony and New Hampshire still held their own charters.

I made this mistake because I ignored my own cardinal rule—stay true to the chronology. One reason I have taken to working my way through this history year by year is the frustration I often feel when reading historians who paint events with broad strokes. It becomes very difficult to tell when things happened, especially when separate developments get smashed together into one sentence and dates are ignored. Somehow, in my reading, I did some smashing of my own, by assuming that Andros was more than just governor of New York in 1674. My apologies to those who read the original version of this post.