Recital: From Robeson to Howell

In the last post, I described the recital in a deed of 1815. It began with the sale in 1727 of 147 acres in Amwell Township by Joseph Howell to John Wright. But how did Joseph Howell get the property? That was not explained, but I assumed it had to come from John Reading, who had the tract surveyed for him in 1715, as shown on the Hammond Map of Hunterdon County.

END_OF_DOCUMENT_TOKEN_TO_BE_REPLACED

A new history of the New Jersey proprietors and their jurisdictions

END_OF_DOCUMENT_TOKEN_TO_BE_REPLACED

The second in the series Hunterdon’s First Settlers

Technically, I should not include Richard Bull in the series “First Settlers of Hunterdon County,” since he never actually lived in Hunterdon, but he certainly qualifies as one of the first landowners. And he surveyed many of the first proprietary tracts here and even further north in Warren and Sussex Counties.

Richard Bull was a land owner in Hunterdon County, well before the county was created. Surprisingly, by the 20th century, even an accomplished student of Hunterdon history like Egbert T. Bush did not know exactly who he was. Bush wrote:1

“. . .  “Bool’s Island” {was} the name of a famous long and narrow island opposite {Raven Rock}, which is said to have taken name from one Bool, who owned the island and much land ashore.”

END_OF_DOCUMENT_TOKEN_TO_BE_REPLACED

The original post on Thomas Greene included a story about his appearance as a witness in a disturbing court case. It came at the end of a long post, and I realized afterwards that it deserved its own space. You can read it here.

It’s been a long time since I wrote anything about the Green family. It was Samuel Green who got me started on this series of posts about early West New Jersey. Now that I’m up to 1690, it’s time to take another look at the Greens. END_OF_DOCUMENT_TOKEN_TO_BE_REPLACED

Once again, Jerseyman has caught me by surprise. He has published a fascinating post relating to early maneuvering before the first Quaker settlers arrived in the Delaware River.

The blog is “History–Now and Then,” by “Jerseyman” and the post in question is The Best Laid Schemes o’Mice an’ Men, Gang aft Agley

Under instructions from the Quaker trustees, James Wasse and Richard Guy had a survey made by Richard Hancock, which was published by John Thornton and Robert Green and titled “A Mapp of Virginia Mary-land, New-Jarsey, New-York & New England,” probably around 1677 or 1678. It showed three designated areas for settlement, one being at “Bethlem” which became Gloucester, another called Antioch where Salem was located, and the third was 5000 acres at the Falls.

END_OF_DOCUMENT_TOKEN_TO_BE_REPLACED

The Council of Proprietors’ Other Business

During their meetings held in 1688 and 1689, the Council of Proprietors was setting up rules for how surveys would be obtained, and naming registrars for Burlington and Gloucester counties, who were Samuel Jennings and John Reading, respectively (Council of WJ Proprietors 1688). They did not act for Salem County because it was still under John Fenwick’s control. But there were other matters to attend to. END_OF_DOCUMENT_TOKEN_TO_BE_REPLACED

It is not clear whether any records were actually turned over, or if they were, what happened to them. While the directive of the Dominion of New England was in effect, New Jerseyans may have tried to avoid compliance. What I do not know is whether John Skene was ordered to deliver the papers to Boston himself or just hold onto them.

At the time of writing, I had not yet visited the State Archives and taken a close look at the Minutes of the Council of West Jersey Proprietors. Those minutes did shed some light on this problem of record-keeping, but first I want to say a few words about my visit to the Archives. END_OF_DOCUMENT_TOKEN_TO_BE_REPLACED

The Courts Carry On

After a long digression to write about the life of Dr. Daniel Coxe before he became governor of West New Jersey in 1687, I am returning to my chronology to study the events of 1688 et seq., beginning with the Burlington Court session of February 1688, in which the list of those present began with “Daniell Coxe Esq. Governour.” END_OF_DOCUMENT_TOKEN_TO_BE_REPLACED 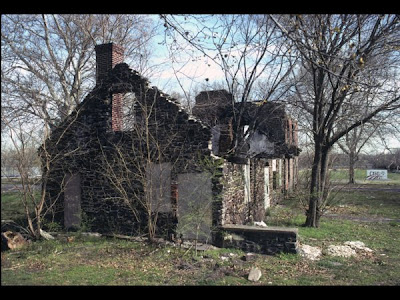 Today, Slate Magazine featured the work of Camilo Jose Vegara, who makes it his business to document the slow decay of American buildings and neighborhoods. His photographs are utterly fascinating to me, but what really caught my attention today was his photograph of the William Cooper Manor House located in Camden, New Jersey. END_OF_DOCUMENT_TOKEN_TO_BE_REPLACED

The West Jersey Assembly met in May of 1687. The minutes of their meeting are not included in Leaming and Spicer’s Grants and Concessions, so for many years, people thought they had not met at all. We know of two matters undertaken by the Assembly in 1687. The first was the problem of the Province’s debt. Despite the fact that taxes had been levied, they could not be collected. Much of this was due to the scarcity of coin, which had to come from abroad. By May of 1687 the debt had risen to £1,250. END_OF_DOCUMENT_TOKEN_TO_BE_REPLACED