part  ten of The Route Not Taken

My previous article about the planned route of the Delaware-Flemington Railroad Company ended at the property of Samuel M. Higgins on the west side of Johanna Farms Road. The route then proceeded across Higgins’ farm in a northeasterly direction, passing not far north of a house near a branch of the Neshanic River.

END_OF_DOCUMENT_TOKEN_TO_BE_REPLACED

In 2011, I began a series of articles on the history of Bull’s Island, Raven Rock, and Saxtonville. (For the original post, please visit “Raven Rock and the Saxtonville Tavern,”  where you will learn something of how the name Raven Rock began to be used.) Recently three documents turned up to shed more light on this subject–a deed of 1722, and two survey maps, one of them made in 1819 showing the original proprietary tracts. It is time to return to Raven Rock for another look.

END_OF_DOCUMENT_TOKEN_TO_BE_REPLACED

I ended the last post with the statement that in 1704, John Reading had a tract of 1440 acres surveyed in the far northwestern corner of the Adlord Bowde purchase. It was an excellent location—superior agricultural soil and access to the river. At this point, the river runs east-west, so Reading’s house could face south as well as face the river, and he had an excellent view of traffic going both ways. He named it Mount Amwell, after his family’s ancestral home in England. END_OF_DOCUMENT_TOKEN_TO_BE_REPLACED

END_OF_DOCUMENT_TOKEN_TO_BE_REPLACED 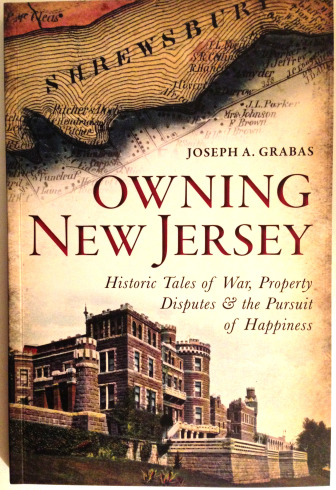 END_OF_DOCUMENT_TOKEN_TO_BE_REPLACED

The dotted line in this picture is a survey line, drawn by Reading Howell in 1774, and as you can see, one of the lines goes right through the middle of the house, which is labeled “Ferry House.” Strangely enough, this house has long been known as the tavern house at Howell’s Ferry (Stockton) which I wrote about in “Jacob’s Path, an 1813 Shortcut.” So why was the tavern house called the Ferry House in 1774? And why did the surveyor run a line right through the middle? Therein lies a story.

END_OF_DOCUMENT_TOKEN_TO_BE_REPLACED

The second in the series Hunterdon’s First Settlers

Technically, I should not include Richard Bull in the series “First Settlers of Hunterdon County,” since he never actually lived in Hunterdon, but he certainly qualifies as one of the first landowners. And he surveyed many of the first proprietary tracts here and even further north in Warren and Sussex Counties.

Richard Bull was a land owner in Hunterdon County, well before the county was created. Surprisingly, by the 20th century, even an accomplished student of Hunterdon history like Egbert T. Bush did not know exactly who he was. Bush wrote:1

“. . .  “Bool’s Island” {was} the name of a famous long and narrow island opposite {Raven Rock}, which is said to have taken name from one Bool, who owned the island and much land ashore.”

END_OF_DOCUMENT_TOKEN_TO_BE_REPLACED

When I first began my blog in 2009, I thought I would use it as a way to discover more about the life of my ancestor Samuel Green. So I began hunting for traces of him in the earliest days of the Province of West New Jersey. But the history of that place became so interesting in itself, that I began to follow its development year by year, thinking that eventually I would get to 1695 when Samuel Green first shows up. (For an index of stories on West New Jersey, go to my About page.)