What Happened to Malakiah Bonham ?

This raises the question of how Malakiah Bonham could marry a third time without divorcing his second wife, Hannah Buckingham. I have not found a record of divorce in the New Jersey legislature. At the time, divorces were handled by the General Assembly. The Genealogical Magazine of New Jersey published divorces by legislative act from 1778 to 1844 in Vol. 53, pg 1-10, but Bonham and Buckingham were not listed.

Some time before Malakiah Bonham married Deborah Harker (if he did), he was obliged to sell his farm in Kingwood. He published an advertisement for the farm in the Pennsylvania Gazette on Nov. 3, 1763. It was very detailed and merits quoting in full, with original spelling:

To be Sold, A Commodious Plantation, containing 210 acres of Land, 100 acres of Plow Land cleared, and in good Repair, 15 acres of Meadow cleared, and 25 or 30 Acres more may be made, well-timbered and watered, a new stone House, finished to the Key, 31 by 21 Feet, two stories high, two rooms on a Floor, with two good Chimnies, commodiously built for a country Store, where one has formerly been kept for a considerable time, well situated in a good Country for Business. Also a good Framed House, with a good Log Kitchen, a good Cellar, and Granary, a good Frame Barn 36 feet by 26 feet, 250 good bearing Apple Trees, the most of them grafted with the best of Fruits, plenty of Peach and other Fruit Trees, lying in Kingwood, a very flourishing Part of Hunterdon County, 25 miles from Trenton and 40 from Philadelphia, about one Mile and a Half from a good Landing, and excellent Fishery on the River Delaware, about a Mile from a good Mill near a School, and different Places of Worship. The Title indisputable. Whoever inclines to purchase the same may know the Terms by applying to the Owner on the Premises. Malakiah Bonham [Penn. Gazette, 3 Nov 1763, quoted in NJArchives, Newspaper Extracts 1762-65, pg 264; also pgs 450, 512].

No one bought the farm, so he advertised again on Nov. 8, 1764. Still no one bought, so Malakiah was forced to sell the farm at public auction on May 1 , 1765. There were slight variations between the three advertisements. For instance, in the first ad, he stated that the stone house was “finished to the key.” By 1765 it was “a new Stone House with two good chimneys and an extraordinary good Cellar.” The frame house with log kitchen in 1763 had “two good Fire Places;” in 1765 it had “a good Kitchen with an Oven in it.” Also in 1765, Bonham emphasized the value of the property for marketing produce by stating that it was “very convenient for sending Produce and bringing goods from Philadelphia by Water.” This meant that produce from the farm, most likely wheat and timber, would be transported by wagon to a landing on the Delaware River, where it would be put on a boat or raft that could handle the shallow water of the Delaware north of Trenton.

During the public sale in 1765, Bonham also offered his farm equipment and livestock for sale: “Twenty-five Acres of Wheat and Rie on the Ground, a Team of good Horses, Cows, and young Cattle, Sheep and Hogs, an Iron bound Waggon, Plow, Harrow, and all farming Utensils, with sundry Shop and Household Goods, too tedious to mention.” This sounds like a man who had to liquidate in order to pay debts, which is, in fact, the case.

Bonham had some minor disputes over debts beginning in 1760, including one with the son of John Warford whose will Bonham had witnessed in 1761. But in 1765, Bonham was forced to come up with £138.7.7 to satisfy his creditor, Daniel Lake of Kingwood. Originally the debt was £69.3.9, but it appears that the court doubled the amount when it found in favor of Lake. On Nov. 23, 1764, Malakiah Bonham signed a warrant to attorney Joseph Warrel to represent him before the court in this case. The warrant was witnessed by Charles Hoff and Catharine FitzRandolph. The original was found in the case file [#14853] and a copy made, because it contained the original signature of Malakiah Bonham, in a neat and steady hand.

Oddly enough, a paper filed with the court on Feb. 7, 1765 in this matter noted that Jos. Warrell was representing Daniel Lake, not Bonham. Bonham’s attorney was Abraham Cottman. Strange that an attorney would switch sides like that. Perhaps the warrant that Bonham had made to Warrel to represent him was made without knowing that Lake had already hired Warrel. Who knows?

Malakiah Bonham was in court quite a bit in 1765, pursuing his own debtors. Samuel Ketcham owed him £18.4.2, John Landis owed him £15.1.5, and Marmaduke Leet owned him £40. Even if Bonham had collected all of these debts, the total would not come close to the amount Bonham owed to Daniel Lake. And he also was sued by John Coxe in February 1765 for a debt of £380.7.4 made on June 12, 1764 in Trenton. There is nothing further in that case, so perhaps it was dismissed.

In 1767, Malakiah Bonham sued Benjamin Rounsavell for a debt of unknown amount. Rounsavell responded that he had paid Bonham in money, labor and services, as well as several wagons that Rounsavell had made for him, part of which was to be credited toward the debt. The court seems to have ruled in favor of Bonham.

Unfortunately, I cannot say where Malakiah Bonham moved after his farm was sold. It appears that he remained in Hunterdon. Shortly after its new church was constructed in 1765, the Flemington Baptist congregation had Malakiah Bonham preach to them, according to John W. Lequear [pg 72]. There seems to have been some forgiveness among the Baptists and among residents of the Rosemont area. In 1767, Malakiah Bonham, along with Edward Prall and Lot Rittenhouse, witnessed the will of the elderly William Rittenhouse of Rosemont, first settler of that name in Hunterdon County.

After the sale of his farm in 1765, Malakiah Bonham took up residence near “the new meeting house” in Amwell. Charles Boyer, in his book Old Inns and Taverns in West Jersey,1 thought this was in the neighborhood of Baptistown. But it seems more likely to have been near Flemington. Boyer wrote that Bonham applied for a tavern license in this location in 1775. What is most intriguing is the special language in the petition. The petitioners “conceive that he has been usefull in that great cause now agitating between America and Great Britain and that should your Worships Grant him a license to keep a Public House it will be in his Power to be more usefull.” Boyer thought that Bonham heard “remarks dropped in an unguarded moment by some patron at the bar and had conveyed the information to the American authorities.”

It seems unlikely that Bonham remained at that tavern, for his next license application for 1777 stated that his tavern was near Quakertown. The Kingwood tax records for 1778 list Bonham there living on 17 acres, with 2 horses, 2 cows and 1 pig. Interestingly, in the tax roll he was listed as “exempt.” This meant he was one of the “persons exempted and not borne upon the return for compleating the four Battalians of New Jersey.” This is surprising because by 1778, Malakiah was 65 years old, far too old to be fighting in the Revolution. Perhaps he went to minister to the troops, but I have found no record to confirm that.

In 1780, Malakiah Bonham was reduced to the status of householder with one horse, according to the Kingwood tax ratables. And he was no longer exempt. His lack of worldly goods may be explained by a suit brought against him by Joshua Opdycke for a huge debt of £3,300. This was in 1780, when inflation was going through the roof. I did not find a document stating what the original debt came to. And I have no idea why Bonham would obligate himself for such a sum. There are three documents at the County Archives relating to this suit, the latest one, dated Feb. 7, 1781, ordering the sheriff to produce Bonham in court at Trenton to answer for damages to Opdycke in the amount of £24.11.5 [#27226, 25723, 30426]. So the court had ruled against Bonham. Hard to imagine how he could have paid Opdycke back. 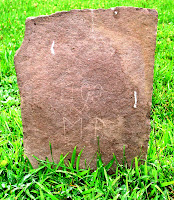 Malakiah Bonham died in Kingwood in 1789, at the age of 76, according to Snell [pg 397]. He had no estate, so he must have been very poor. The source for the date was supposed to be the minutes of the Kingwood Baptists, but I have not been able to find it there. [Perhaps it was announced in the Flemington Baptist minutes.] His old nemesis, Joshua Opdycke, died on Feb. 28, 1789.

This stone was found in the Rosemont Cemetery. It reads: “1790 M B.” It could be Malakiah Bonham’s, or perhaps a Mary Bonham, or a Mary Bray. No way to know.

Of the first two children (Daniel and Zephaniah) of Malakiah Bonham and his first wife, I have no information. Daughter Zeruiah or Zerviah might have married someone from the Sutton family and migrated to Westmoreland County, Pennsylvania, according to Olive Rowland.

Son Absalom Bonham is the one who remained in Kingwood the longest, it seems. He served in the Revolution as an ensign, then a 2nd lieutenant, and a 1st lieutenant in the Continental troops, Jersey Line. After the war, he left Hunterdon County. Absalom’s first wife Jemima Harker (if that was her name) died young, for in 1785, Bonham married Rebecca Morris Cox in North Carolina. He died there, in Lincolnton, on Oct. 4, 1794. Brownie MacKie has informed me that Absalom Bonham’s “survivors” in Maryland were Deborah, Rachel, Jemimah, and Malakiah.

Linda Peacock points out that in 1789 a Malachiah Bonham married Mary Williamson in Frederick Co. Maryland, and that in the 1800 Frederick County census, Malachiah Bonham was listed between the age 26 and 44. It is possible he was born in 1756, the year Mary Fox delivered a bastard child. But it is more likely this is the son of Absalom Bonham.

This is all I have to say (for now) on the Hunterdon County families related to George Fox the Quaker founder. I’m sure Fox would have been disappointed to know that his descendants here had so little interest in the religion he struggled so hard to establish. Fortunately, the success of the Quaker religion did not depend on the founder’s family.

Next post will begin a series on Samuel Green, Surveyor of Amwell, and some (certainly not all) of his family.

Addendum, 10/28/13:  I just came upon the description of Malakiah Bonham’s tavern license application of 1775 in Boyer’s Old Inns and Taverns of West Jersey. This required some rewriting of a couple paragraphs.