What’s In a Name? Skunktown

“Skunktown – How the Name Came About”
We have often been asked how the thriving and pleasant town of Sergeantsville had acquired the nickname of “Skunktown.” We ran across Dr. Cramer last Tuesday night, and what he doesn’t know about Sergeantsville and Delaware township isn’t worth knowing. He promptly gave us the information desired. He said that away back in the early part of the century the proprietor of the hotel in that town secured a new sign-post. The erection of such a stick was made an occasion of great interest in those days. A hole was dug one afternoon large enough to bury a house and barn in, and then the workmen retired for the night. Next morning when the neighborhood had gathered to assist in planting the post it was discovered that three or four skunks had taken possession of the hole, as if they had decided upon it for winter quarters. From that day the town of Sergeantsville has been dubbed “Skunktown.” Unfortunately, the Doctor could not tell whether the “varmints” were buried with the post, or persuaded to leave peaceably with their cologne sacks.1 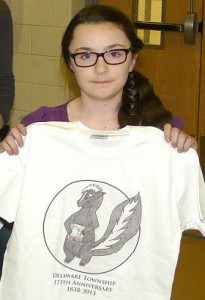 This delightful story was first published in the Hunterdon Democrat in February 1888, and in abbreviated form on Feb. 14, 2013, under the heading of “Old Ink.” Perhaps some of you saw it. This is another wonderful example of how the myth is better than the facts.

In light of the recent T-shirt competition held at Delaware Township School to celebrate the creation of Delaware Township, and Jaclyn Papalski’s winning skunk T-Shirt, I thought I’d add a few words on the subject of Skunktown.

Contrary to Dr. Cramer’s story, the name was being used as early as 1794.2 We know this because back then Route 604 was not called the Rosemont-Ringoes Road. It was called the road from Skunktown to Opdycke’s Mill. Actually, back then the name was written “Schoonk Town,” which looks rather Dutch.

There were Dutch settlers in Delaware Township in the 18th century, for instance, the Opdyckes, Covenhovens, Van Camps, and Van Dolahs. It could be that one of these early settlers noticed skunks in the vicinity. However, a certain linguist I am acquainted with3 informs me that the word skunk is actually an Indian word, Algonquin for ‘pole cat,’ and “The standard Dutch word for “skunk” is “stinkdier”, but they also use “skunk.”

There are other explanations for the name. Bob Dilts wrote that his favorite theory was that a man set up “a market for trading skunk pelts” and his trade was so odiferous that “a traveling merchant could not resist the temptation” to call the place Skunktown. Dilts claims this happened sometime before the Revolution. Finally, a story told by Tom Lambert seems close to the version told by Dr. Cramer. In early days, some people wanted to erect a pole that was very tall, and so therefore had to construct a very deep hole for it. The hole filled with water, so they left it to drain before putting the pole into it. When they returned, they found skunks in the hole.

One other observation—for many years I have noticed that in February, when skunks are mating, you can always rely on smelling them right around where Locktown-Sergeantsville Road branches off from Ferry Road. Could they be descendants of the original skunks? What a thought.

And what about this Dr. Cramer? He was Isaac Smith Cramer, M.D., who came to Sergeantsville from Warren County about 1855, the year he married his wife, Margaret R. Inghams. They had no children. In the census of 1860, Isaac S. Cramer, age 27, was listed as a doctor of alapathy, which was a popular alternative to traditional medical practices in the middle of the 19th century.4 Dr. Cramer was listed among the draft registrations for 1863, but he was no fan of Abraham Lincoln. He was a staunch Democrat, and Jersey Democrats had little good to say about Lincoln. Not only was Dr. Cramer a physician, he also ran a nursery, right in Sergeantsville. On Arbor Day in 1894 he presented a tree to every school in Hunterdon County. In his later years, he retired to Flemington where he ran a drug store. He died in 1911 at age 76; his wife Margaret died the next year, age 84. Dr. Cramer ranks as one of the most interesting residents of Delaware Township.

Postscript, 2/27/2013:   I suppose I could write a whole post on the subject of the name of Sergeantsville and how people don’t always get it right. Recently, I discovered a whopper: “Surgeonsville.” It appeared in a family tree for the family of Smith Miller and wife Rachel Miller, and their daughter Esther, whose second husband was Peter Green, of the aforementioned “Surgeonsville.” Actually, the pronunciation is not bad.

« By Their Names You Shall Know Them » Joseph Moore, “the Maverick Democrat”