At the end of the last post, I said I would leave the subject of Coxe’s West Jersey landholdings to discuss his other plans for the colony. Spoke too soon. Here is some more on the subject:
Coxe’s “Account of New Jersey” is a remarkable document. It was written in 1688, after he had solidified his position as Governor of West Jersey. Perhaps that was why it was written—to clarify what the province had to offer economically, and to inventory what his holdings there were. Or was he writing up a prospectus for some future real estate deal? With Coxe, almost anything seems possible.
His list of real estate holdings and proprietary shares is a long one, and it must have been difficult keeping track of it all, since properties were not simply bought from a realtor, but needed to be approved of by the Council of Proprietors, followed with an Indian purchase, then a proper survey approved of again by the proprietors. And it appears that Coxe was paying interest on his land purchases, which means he had mortgaged them in some way that he does not describe. One also gets the impression that Coxe was more than generous in the valuation of his lands. All in all, it is quite amazing. You can read this document in The Pennsylvania Magazine of History and Biography,vol. 7, no. 13 (1883) where “Biographical Notice of Doctor Daniel Coxe, of London” by G. D. Scull was published.

This wonderful map is on file at the Library of Congress. According to the Rutgers Special Collections website, the map is dated 1706. That seems a bit early for me since so little is shown of the area north of Trenton. The map seems to date to about 1690. Whatever the date, it is interesting for the way it shows the location of Dr. Daniel Coxe’s holdings in West Jersey. The map shows a large designated for Doctor Coxe south of Trenton, along the River. It also includes a large tract with the jagged boundary immediately recognizable as the northern boundary of Hopewell Township. The tract runs south to the “Road from York to Delaware Falls,” from the Delaware River to the Millstone River. This tract is indicated on the Hammond Map as “Gov. Daniel Coxe’s 30,000-acre (1707) Hopewell Patent” [see previous post]. 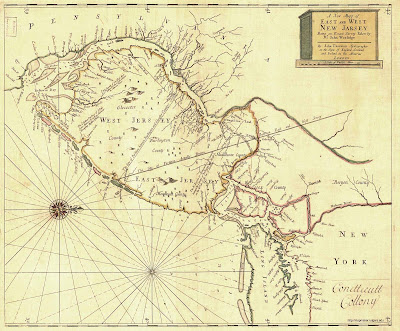 At the September 1688 meeting of the Council of West Jersey Proprietors, it was agreed that

every proprietor, and every person interested in proprieties, shall pay to the use of Daniel Coxe, to any person appointed to receive it, as a reimbursement for the money laid out by him, in the Indian purchase lately made in the lower counties, the sum of twelve shillings and six pence for every thousand acres, and so proportionably to be taken up out of that purchase; the first year to begin the first day of April last past, and from that time twelve months, to advance eighteen pence upon every year ensuing, until the time that the money aforesaid to be paid for; the land to be laid out within the bounds of the same purchase, as consideration for the monies disbursed by the said Daniel Coxe in the said Indian purchase of the whole tract, which, by the surveyor Andrew Robeson, is computed to be three hundred thousand acres of good land, capable and worthy of improvements; which money being paid, the party so paying shall be acquitted of all other payments on the consideration aforesaid

“2. That the surveyor for the time being, be engaged not to set out any land within the limits of this Indian purchase, until the money above-mentioned be paid and secured as abovesaid.

“3. And it is further agreed that for the land taken up by order of the said Dr. Coxe, above the falls of Delaware, every proprietor taking up any part thereof, shall pay to Dr. Coxe, or his order, the sum of twenty-five shillings per thousand acres, and two shillings and six pence yearly consideration, ’till the money be paid.” [Smith, NJ, pg. 202-03].

Clearly the land north of Trenton (the falls of the Delaware) was considered far more valuable than land south of it. And it appears that Coxe had the proprietors in the palm of his hand.

At this meeting (Sept. 6, 1688), Samuel Jennings was named commissioner to examine and record deeds for Burlington County and issue warrants to the surveyor general, Andrew Robeson, on behalf of the Proprietors. And John Reading was named to that position for Gloucester County. They also resolved that:

no person or persons whatsoever, shall presume to purchase any land from the Indians, without the consent of this council first obtained, otherwise to be prosecuted as our common enemy.”

Correction: I’m not so sure, after going more carefully through the papers published by G. D. Scull, that the statement by Coxe was written in 1688. It is hard to determine what was written on that date and what was written later in 1692.