John Reading and the Town of Gloucester, 1686

The Town of Gloucester 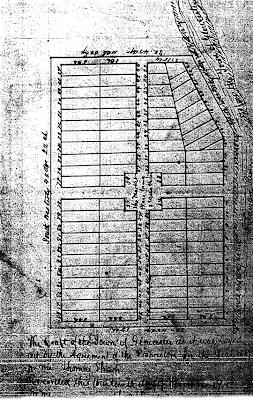 In 1686, Thomas Sharp was authorized to draw up a survey for the town of Gloucester, and to lay out the house lots required. There is a map of the town in Sharp’s Book of Surveys on file at the State Archives, just after the index of names.

I made a copy of the map from microfilm and it is dreadful. Such is the case with many of the microfilm images. In an ideal world, I would have made time to get back to Archives and take a photo of from the original book, if permitted. It would have been worth the trouble if Sharp had put names to each of the lots, but he did not. And, comparing Sharp’s map to one published in 1920 by the “Schedule Rating Office” of the Engineering Department, Newark, NJ, there is little resemblance between the original plan and the actual streets of 1920. (I found the 1920 map on Google Images.)

The Sharp map is labeled: “The Draft of the Town of Gloucester as it was layed out by the Agreement of the Proprietors in the year 168_ [?] by me Thomas Sharp, Recorded this fourteenth day of November ___ [?].” Wouldn’t you know the dates would be illegible. Perhaps the date was 1687, as that is the date used by Richard Veit in his book Digging New Jersey’s Past (pg 35).

John Clement, in his article “Gloucester City” published in the Pennsylvania Magazine of History & Biography in 1885, stated that Sharp laid out 88 lots in 1686 surrounding a market square of almost 200 square feet, located at the center of town where the two main streets intersected. Each lot, according to Clement, was 60 feet wide by 180 feet deep.

Turns out, this map was just a fantasy. Another map was drawn by Thomas Sharp, in 1686, according to Isaac Mickle, in his Reminiscences of Old Gloucester (1845), a copy of which is shown on pg 36 of that book, running as far north as Newton Creek. Mickle wrote [pg. 35] that Sharp laid out “ten equal shares to correspond with the number of proprieties.” 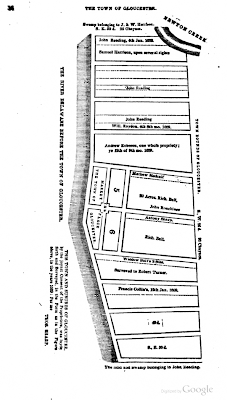 The map shows that John Reading had several lots. Richard Bull had two large lots, while widow Bull had 2/8ths [of a lot or a share?]. Others on this map were Mathew Medcalf, Samuel Harrison, William Raydon (the first ferryman), Andrew Robeson, John Roachines [?], Anthony Sharp (uncle of Thomas Sharp), Robert Turner and Francis Collins. John Reading also owned land and swamp to the south of the town limits, while J. & W. Harrison owned the swamp on the north end of town.

It is interesting that these people (Robeson, Harrison, Medcalf, Turner, Collins, Reading and Bull) were not among the first Irish settlers identified by Thomas Sharp in a letter written sometime later. He stated that he came to the Third Tenth in 1681 along with Mark Newby, Thomas Thackara, George Goldsmith and William Bate. None of these took up lots in the town of Gloucester in 1686, except for Thomas Sharp, who’s lot was credited to his uncle Anthony Sharp. These earlier settlers had already taken up land and must not have felt the need to acquire town lots. Or perhaps they bought lots after the 1686 map was drawn.

Like most early settlers along the Delaware River, John Reading probably first sheltered his family in some kind of dugout or cave dwelling, as depicted here. But dugouts and cave dwellings were only meant to be temporary, and for a man of John Reading’s stature, completely unacceptable.

Thanks to some archeological work done in the old town of Gloucester in 1983, we have an idea of where John Reading lived, and even of what his house looked like. The researchers, Ronald A. Thomas (now deceased) and Martha J. Schiek, reported that the area they studied matched lots 9, 10, 11, 34, 35, 36 of an original survey of Gloucester dated 1689; the house was located on lot 10. I have not seen this map, but the writers include a U.S.G.S. map of the town locating the site, and it seems to be west of the lots laid out in the map published by Mickle. The lots run west of King Street, along Market Street to the Delaware River, where John Reading is said to have run a ferry to Philadelphia.

The archeological study was published in the Bulletin of the Archaeological Society of New Jersey, No. 43, 1988 with accompanying illustration of what the house probably looked like. The article (on pg 3-11) is titled “A Late 17th-Century House Site in Gloucester City, New Jersey.” Here is how they imagined a house that might have belonged to John Reading looked: 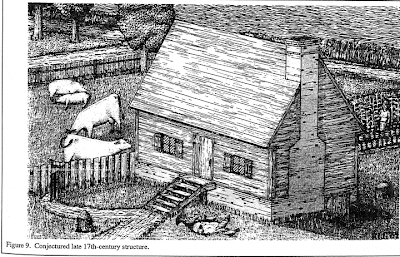 Think about it—this was the home of one of the most prominent men in the county. The house had a brick foundation, which seems unusual for us in Hunterdon County, where all the old foundations are laid in stone. But Francis Collins was living in the third tenth at the time, a well-known bricklayer who also ran a brickyard. The windows were probably diamond-pane casement windows, as the archeologists found window lead dating to the late 17th century. The house, judging from its cellar hole, measured 26 feet by 12 feet, the longer side running north-south. This would allow for a two-room house, and probably a small room above. The remnants of a fireplace hearth were found, along with late-17th-century fire tongs.

Also in the rubble were fragments of earthenware from the Delaware valley, from England, the Netherlands and Germany. More surprising was the discovery of fragments of glass stemware. Glass stemware and leaded windows, along with 17th-century coins, suggest that the original owner was very prosperous. There were 890 pipe stem fragments in the cellar. From now on, when I picture John Reading in my mind, he will have a pipe in his mouth.

The archeologists found that pigs were the favored meat for residents of this home. This makes sense, judging from the number of times hogs show up in the court records of early Gloucester and Burlington.

Aside from evidence that the first owner was a wealthy man, there is one other clue that that owner was John Reading, and that is evidence of a fire. Reading described a fire in his house in the Gloucester Court records. He did so because many of the records were destroyed in that fire. But since the fire took place in 1698, I must postpone consideration of it in order to remain true to my chronology.

John Reading had some trouble with one of his neighbors, John Ithell. As early as May 1685, these two men were arguing in court over who had rights to some Gloucester property. The earliest record we have of Reading in Gloucester is a reference in one of these court appearances.

When the Gloucester Court met at Red Bank on December 10, 1686, Reading appeared as plaintiff, complaining that Ithell had unjustly claimed land belonging to Reading, and “hath several tymes publickly scandalized and defamed the title of ye sd plaintiffe to his house and plantation.”

Ithell made his case by presenting a deposition from William Goodbody who claimed that he was asked by Ithell in June 1684 to run a line on the north side of his plantation at Timber Creek. Apparently this had to be redone in the spring of 1685, when, according to Goodbody, “the Surveyor” was surveying Ithell’s land and was interrupted by John Reading who wanted 100 acres which he bought of Ithell to also be surveyed. Goodbody claimed that the Surveyor and Reading went off by themselves to survey the plot to Reading’s advantage, and to the great dissatisfaction of John Ithell.

In answer, Reading produced his English title (a large conveyance from the grand proprietors in England), as well as Indian purchase money (from evidence given by Thomas Bowman); a warrant for a survey from the Commissioners; and a statement about the legality of his survey.

Daniel Reading (John Reading’s brother) testified that Ithell, John Reading, William Stone the Surveyor, and others were at John Ithell’s house, when John Reading said that he and the Surveyor would look for some land adjacent to Ithell, at which Ithell consented, saying he was welcome to it, and “if a certain piece of Meadow lying on a Branch of the Creek would do him any kindness,” he might have it too. And that once the survey was made, Ithell seemed pleased that he and Reading would be neighbors. William Stone testified to the same.

The judges who heard the case were Andrew Robeson, Francis Collins (the brickmaker), Thomas Thackera, and John Wood. Judge Collins himself declared that Ithell had stated that he and Reading had resolved things to their mutual satisfaction. The jury took some time to make a decision, which went in favor of Reading. Ithell was charged two pence damages.

I am a little confused by this suit, as it refers to a meadow bordering Timber Creek, which is south of Gloucester Town. Reading complained of being defamed of title by Ithell to ‘his house and plantation.’ It makes me wonder if Reading’s principal residence was south of and outside the town of Gloucester, and the town lot was used for business.

To determine if Reading had a home plantation south of Gloucester would require a close study of Reading’s Gloucester deeds, of which there were many. The earliest I know of was dated September 3, 1686 in which Reading bordered land sold by William Steele to Humphrey Morrey of Philadelphia [West Jersey Records, Liber B1 fol. 116]. This might have been the land that was in dispute with Ithell, as Steele was mentioned as having had a survey done of the land in question, and Goodbody’s deposition was taken by Humphrey Morrey in Philadelphia. Perhaps a Reading scholar can pinpoint this location.

John Reading was an active investor in real estate, but I will refrain from listing all his Gloucester deeds and trying to identify where they were located. The only deeds I really care about are the ones concerning Hunterdon County, and they do not appear until the 1690s.