I intend to publish the articles written by J. M. Hoppock, with commentary in footnotes, but thought it wise to begin with his obituary, so that readers can get an idea of who he was. The obituary itself is a marvel, redolent of the turn of the 20th century in its phrasing and perspective.

Of course, as with all obituaries, only positive things could be said about the man, and the fact that he drank a bit too much and was not as fastidious about facts as the writer claims he was can be left aside while his good points were recognized. But more than that, the writer appears to have been a personal friend of Hoppock’s, and was deeply moved by his death. He wrote that he was “a trusty friend and a most genial companion.”

I cannot claim personal knowledge of his faults, having been born almost half a century later, but another county historian, Frank Burd, spoke to me many years ago about Mr. Hoppock, and felt pretty strongly that Mr. Hoppock was inclined to take the stories he was told by local folk hook, line and sinker, so to speak. I regret that Mr. Burd did not write his own commentary.

I would also like to note that Mr. Hoppock’s articles were not printed in “The Hunterdon County Democrat.” They appeared in “The Democrat-Advertiser,” which came into existence in Flemington in 1881, according to Hubert G. Schmidt’s book The Press in Hunterdon County. It was not a significant enough paper to qualify for advertising by the County freeholders. In 1890, the paper was edited and published by John N. Jones and John N. Voorhees. By the turn of the century, its editor-publisher was H. Martin Voorhees, son of John Newton Voorhees. In 1926, the Democrat-Advertiser was ”absorbed” by its one-time competitor, “The Hunterdon County Democrat.”

The author of the obituary stated that Hoppock began writing a weekly letter to the Advertiser “seven or eight years ago.” These were notes on local events in or near Sergeantsville, and his were the lengthiest submissions of any of the ‘local correspondents.’ My particular interest is in the articles that were featured on either the front or back pages of the newspaper, usually with a contemporary photograph. It would be nice to collect all of Mr. Hoppock’s submissions from Sergeantsville, but time is too short and the paper is too fragile. 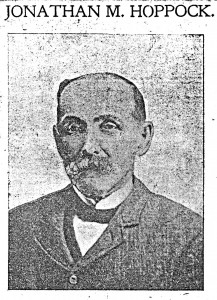 It is a most distressing duty we have here to perform in the announcement of the death of our popular letter writer, Jonathan M. Hoppock, which occurred at his home in Head Quarters at about 11 o’clock Monday night.1 As has been stated in this paper, Mr. Hoppock was stricken with apoplexy nearly a month ago, and from the unconsciousness that followed he could not be rallied save for a few intervals of short duration. The death that was recognized as inevitable from the beginning of his illness has come and the man of many friends, the man who was a prime favorite in all Delaware township has gone, bearing the rich gifts of talent and the warm emotions of a generous nature to lay them at the feet of Him who gave them. May he find joy at the Mercy seat.

Jonathan M. Hoppock was a son of the late Henry Hoppock, and was born near Croton.2 In early life he evidenced an ability as a teacher and took up that profession with great success. He taught school at various places in these nearby townships for nearly fifty years, and at the time of his retirement a year or two ago was the oldest teacher in the county.3 He was loved and respected by his pupils at all times, and he made earnest endeavor to expand and polish their eager minds.

The deceased took up the work of correspondence for this journal seven or eight years ago. That his weekly letter was greatly appreciated by all of us goes without saying. He was a smooth interesting writer and a stickler for facts. His taste ran largely to historical events and many of the illustrated sketches he sent us for publication from time to time showed the result of untiring research. He was a noted pedestrian and thought nothing of a twelve or fifteen mile jaunt. Rugged and hearty, his life was an active one, and useful withal. He will be missed, perhaps, more than any other citizen of the township.

In politics our good friend Hoppock was a Democrat of the old school. He was not, however, offensively partisan. Twice he was elected assessor of Delaware township, and in that office he did his duty intelligently and conscientiously. In the year 1864 he married Elizabeth Cain, a daughter of Nathan Cain formerly of Rosemont. She survives him, with two daughters, Mrs. J. B. Hunt, of Jersey City, and Mrs. Harry Hoff, of Rosemont. His age was 68 years, 1 month and 9 days.

“Jonty,” as he was familiarly called, was a trusty friend and a most genial companion. His ways were gentle, his manners courteous. Few, if any, were his enemies, while well-wishers stood ever at his back. But the long life that was passed in the Sergeantsville community is ended and a familiar face and figure has gone out. The affliction is great, we shall all miss his spoken jest, his written witticism, but in the home where he was so loved for his kind and tender care as husband and father, sorrow’s heavy hand is most keenly felt.

Funeral to-morrow (Friday) morning from the house at 9.30, and from the Sergeantsville Church at 10.30; interment at Rosemont.

We may drop the sympathetic tear as we gather about his grave to-morrow, but tears are vain things. They cannot restore the dead to life, nor can they change God’s edict that man shall die. We bow in submission while realizing that The Advertiser has lost a valued assistant and brother.

Clint Wilson, another local historian of later years, wrote about Jonathan M. Hoppock. I have a clipping of his article, published, I believe, in the Lambertville Beacon, but I do not have a publication date. I was surprised to discover that Mr. Wilson neglected to put quotation marks around some of his sentences, lifted word for word from the 1906 obituary. However, Mr. Wilson was able to contribute a new story about Hoppock that is, as they would have said in Mr. Hoppock’s day, worthy of notice.

In the Thursday edition of the Democrat-Advertiser, November 1, 1906, I read the obituary of Jonathan Hoppock, a noted Sergeantsville resident. He was a teacher, historian, writer, politician and prominent citizen that I had often heard of. I had seen a few of his historic writings from old scrap books.
Jonathan M. Hoppock was the son of Henry Hoppock who lived near Croton. In his early life, he evidenced the ability of a teacher and took up that profession with great success. For nearly fifty years, he taught at various places in nearby townships and when he retired from teaching in 1905, he was the oldest teacher in the county.

He wrote a weekly letter to a county paper usually about historic events. His articles often included illustrated sketches and he was known as being a stickler for facts. Many of his articles were the result of extended research.

Since he was rugged and hearty, his life was an active one. He thought nothing of a twelve or fifteen mile jaunt. I remember hearing the story told about him from the pot bellied stove days at Wilson’s Store. They tell about his teaching in Locktown and living near Sergeantsville. Each day he would jaunt to the Locktown School except when he would occasionally ride with a farmer on his way by horse and buckboard to the Locktown creamery. One particular morning, a farmer invited Jonty for a ride just outside of Sergeantsville and Jonty replied, “I can’t ride with you this morning. I’m in a hurry.”4

Jonty, as he was fondly called was a gentle and courteous person. Few, if any, were his enemies and he had many friends. In politics, he was a Democrat of the old school. He was not, however, offensively partisan. Twice he was elected Assessor of Delaware Township. In that office, he obtained a precaution of doing his job intelligently and conscientiously.

“Jonty” Hoppock died before the writer was born, but because of his achievements, many people living today have heard about him. He was certainly one of the leading local citizens of his generation. Many have mentioned that he was a very fine teacher. Certainly, it is nice to be remembered, when the good and the contributions to a community are remembered.