Postscript to The Heaths of Locktown

Shortly after publishing last week’s article, the Heaths of Locktown, David Sherman sent me four very interesting documents from his collection of Heath & Sherman memorabilia. They shed new light on the lives of Edward M. Heath and his son Robert, as well as their friend Lester B. Sherman, and his wife Fayetta Reep’s family.

Let’s look at them chronologically: 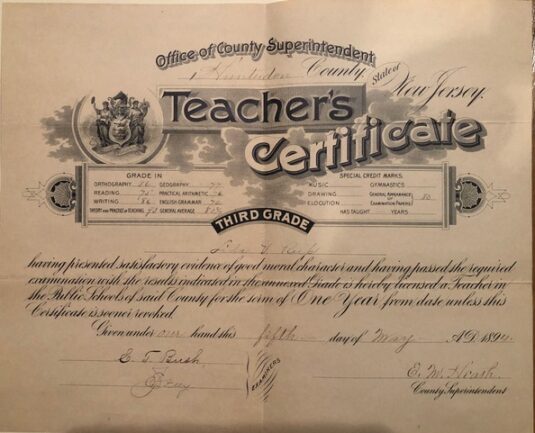 “Lida V. Reep having presented satisfactory evidence of good moral character and having passed the required examination with the results indicated in the annexed Grade is hereby licensed a Teacher in the Public Schools of said County for the term of One Year from date unless this Certificate is sooner revoked.” May 5, 1894.

Signed by E. M. Heath, Co. Supt., and E. T. Bush, examiner. The other examiner’s name is illegible to me.

The certificate was for teaching the third grade. Miss Reep herself was graded on Orthography (86), Geography (77), Reading (75), Practical Arithmetic (76), Writing (86), English Grammar (72), and Theory & Practice of Reading (90). Her General Average was 80+. She was also graded on General Appearance of Examination Papers (80).

Lida Victoria Reep, born Oct. 23, 1875 in Falls (or Fallsington), Bucks Co., PA, was the second oldest of nine children of William Benjamin Reep and Henrietta Myers. She was included in the family when it was counted in the 1880 census. Only two years after receiving her certificate, Lida Reep got married. Her husband was Elijah Hewitt Buchanan (1872-1953), brother of George W. R. Buchanan of West Amwell, who married Lida’s sister Virginia Richmond Reep in 1898. George and Elijah were sons of Joseph West Buchanan and Henrietta Hewitt of West Amwell Township.

I do not know whether Lida continued as a teacher after marrying. The fact that she did not have children suggests she might have.

Lida Reep and Elijah H. Buchanan were living in Delaware Township in 1900, where Elijah rented a farm and worked as a trucker. It appears that soon after the 1900 census was taken, Lida’s marriage to Elijah Buchanan fell apart. About 1903, Elijah got married to Lida’s younger sister Ada (1885-1965), even though Lida was very much alive. Presumably they had gotten a divorce.

Letter of recommendation for William Reep, 1896 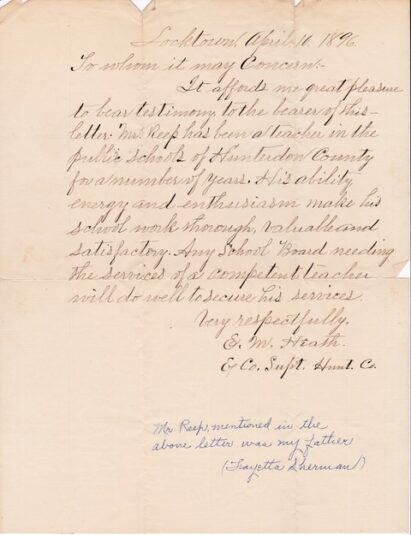 To whom it may Concern.
It affords me great pleasure to bear testimony to the bearer of this letter. Mr. Reep has been a teacher in the public schools of Hunterdon County for a number of years. His ability, energy and enthusiasm make his school work thorough, valuable and satisfactory. Any school Board needing the services of a competent teacher will do well to secure his services.
Very respectfully,
E. M. Heath, Ex Co. Supt. Hunt. Co.

A note at the bottom of the page reads:

“Mr. Reep, mentioned in the above letter was my father (Fayetta Sherman).”

Fayetta Sherman was born Fayetta Henrietta Reep on August 9, 1889 at her parents’ home in West Amwell Township. She was a sister of Lida V. Reep Buchanan, Virginia R. and Ada Reep Buchanan. She married Lester B. Sherman, about whom I will have more to say.

Notice that Edward M. Heath signed himself as “Ex Co. Supt.” He had served as Hunterdon County Superintendent of Schools from 1888 to 1895, but he was so widely respected, that a letter from him even after he had served his term was valuable to someone like William Reep.

Wm Benjamin Reep married as his first wife William Burgstresser’s sister, Emma Jane Burgstresser (1849-1870). Emma Jane had two daughters who died young, as did Emma herself, at the age of 21. Wm Benj. Reep married second, on February 1, 1873, Henrietta Myers (1852-1928), daughter of Edward Myers and Elizabeth Major of Tinicum. The Myers were a good example of families that moved back and forth across the river from NJ to PA and back to NJ, since Edward’s parents were Cornelius Myers and Rebecca Mason of Amwell Township (see Albertus Myer’s Bible).

William Benj. Reep and wife Emma were living in Newtown, Bucks County in 1870, where Reep, age 21, was (like son, like father) employed as a schoolteacher. Ten years later, Reep, still teaching school, living in Fallsington, Bucks Co. with wife Henrietta and their three daughters.

Sometime after that, Reep decided to move with his family across the river to West Amwell Township. On March 9, 1888, he bought a farm there of 38.36 acres from Andrew D. W. and Sarah B. Stout of Lambertville for $1400.2 It must be then that daughters Virginia, Lida and Ada became acquainted with the Buchanan family.

On June 17, 1896, the Republican reported that “Benjamin W. Reep, who has been teaching the Mount Range public school in West Amwell for several years, has resigned and taken a position as teacher of the public school at Pattenburg.” This explains why he wanted a letter of recommendation. Apparently, he got a job as schoolteacher in Union Twp, but he died only two years later, on Sept. 26, 1898, according to his obituary:

Death at Pattenburg on 26 Sept. 1898, William Benjamin Reep, aged 49 years and 11 months. He was the husband of Mrs. Henrietta Myers Reep. He was a school teacher in Union Tp. and had been a school teacher and Justice of the Peace in West Amwell Tp., elected in 1894. He recently moved to Pattenburg. Burial at Frenchtown.3

Lester Bellis Sherman (1891-1970) was the only child of Manning Force Sherman and Amy Catherine Bellis of Kingwood Township. Amy died of tuberculosis in 1894, when she was only 26 years old, and Lester was only three.

Manning F. Sherman married second, on Nov. 26, 1896, Edith A. Horne (c.1880-1957), daughter of Jeremiah T. and Margaret Ann Horne of Delaware Township. (Edith’s sister Mary D. Horne was married to Henry F. Bodine of Locktown. The Bodines and Jeremiah and Margaret Horne were buried in the Locktown Christian Church Cemetery.) Manning and Edith had a son, Norman Jeremiah, in 1904, another son Paul Q. Sherman in 1907 and a daughter Margaret in 1912, the year that Lester got married.

Lester B. Sherman was still living at (and working on) his parents’ farm in Kingwood Township in 1910 when he was 18. But two years later, after marrying Fayetta Reep, he must have moved into a house in the Locktown vicinity, for that was when Sherman established a close relationship with the Heath family of Locktown, as mentioned above.4

But Locktown was just too small a place for L. B. Sherman. In 1920, the family was living in Trenton, where Sherman worked as a clerk at a foundry, and their three children were counted, ages 5, 4, and 2. In addition, Lester’s stepbrother Norman J. Sherman, who was then 16 years old, was a member of the household.

After Trenton, Sherman and his family moved to Belmar in Monmouth County, where Lester sold life insurance. There they remained. Lester Sherman was selling life insurance in the censuses of 1930 and 1940. He lived to the age of 78, dying on April 9, 1970. Fayetta survived him, dying on June 8, 1984, age 94.

David Sherman, who shared these gems with me, told me that Robert T. Heath and the Shermans were so close that Lester’s son Frank often called Robt. T. Heath “Uncle Rob.” (Frank Sherman was Manning Francis Sherman, 1914-1984, eldest son of Lester & Fayetta.) The document shown here is a promise by Lester B. Sherman and M. F. Sherman (probably Lester’s father, Manning Force Sherman) to pay the sum of $500 to Robert T. Heath, “on demand.” 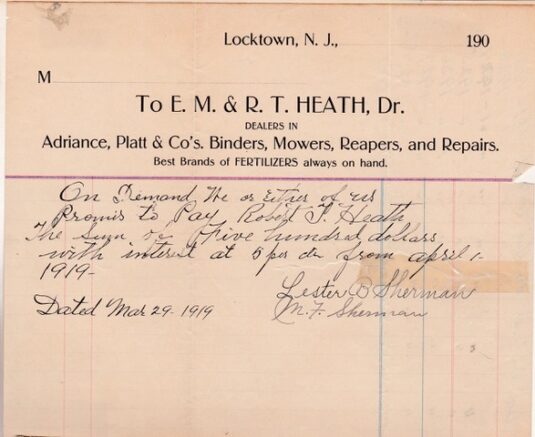 As you can see from the heading of the statement, Edward and Robert were “Dealers in Adriance, Platt & Co’s. Binder, Mowers, Reapers, and Repairs. Best Brands of Fertilizers always on hand.” Until Dave Sherman sent me this paper, I had come across nothing to suggest the Heaths ran a business like this. But I am not too surprised—Edward M. Heath was a strong supporter of the Locktown Grange, and thus likely to be active in agricultural pursuits.

As evidence for this, while researching Robert T. Heath I came upon a deed to him dated Dec. 23, 1895 in which Henry F. Bodine and wife Mary D. Horne sold to Heath for $1 their rights in a tract of 137.25 acres in Locktown, being the half share of the farm that Henry and brother David Bodine purchased from William Lair, Sr. in 1873.5 If I had stopped reading there, I would have been entirely misled. Always read the recital to its end, which is where this sentence appeared:  “This conveyance is to pass to the purchaser the manure on the premises.”

Researching the deeds of Robert T. Heath was ‘going the extra mile,’ and it turned out to be worth the trouble. Not only did I learn about this charming conveyance, but one of the witnesses to it was none other than Edward M. Heath, who was identified as “Master in Chancery of New Jersey,” another fact about him I did not know. I also learned that the Bodines had gone deeply into debt and in the next deed assigned all their goods, except the pile of manure, to Henry A. Fluck of Flemington.6

“Dear Sir:  I am inclosing you a check for $300 also a note covering the two other notes and the interest up to date. I will send you my check for the balance $40.00 and the two old notes as soon as I can turn some other old checks into money. Hoping this will be of some use to you, I am yours as ever, Yours very truly, R. T. Heath” 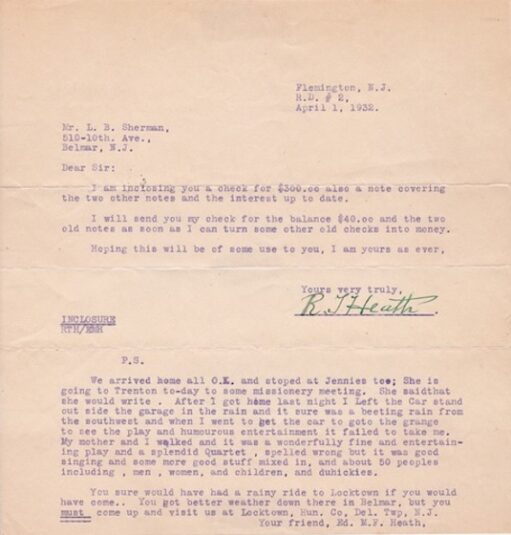 Just because the Shermans had moved across the state to the east coast of New Jersey, they were not prevented from maintaining a close friendship with the Heaths. Thirteen years after Lester B. Sherman borrowed $500 from Robert T. Heath, Heath borrowed at least $340 from Sherman.

“We arrived home all O.K. and stopped at Jennies too; She is going to Trenton to-day to some missionery meeting. She said that she would write. After I got home last night I left the Car stand out side the garage in the rain and it sure was a beeting rain from the southwest and when I went to get the car to go to the grange to see the play and humourous entertainment it failed to take me. My mother and I walked and it was a wonderfully fine and entertaining play and a splendid Quartet, spelled wrong but it was good singing and some more good stuff mixed in, and about 50 peoples including men, women, and children, and duhickies.

You sure would have had a rainy ride to Locktown if you would have come. You got better weather down there in Belmar, but you must come up and visit us at Locktown, Hun. Co, Del. Twp, N.J.”

I couldn’t help but wonder who Jennie was. Presumably she was living along the Heath’s route home from visiting Lester & Fayetta Sherman in Belmar.

I could not find a Jennie closely related to the Heaths or Shermans. Out of 114 Jennie’s in my database, I found only two possibilities. The 1930 census tells us that Amy Jennie Horner (1871-1970), daughter of Samuel S. Horner and Martha Ann Strimple of Stockton, and wife of William Horace Bodine, Jr. (1857-1936), was living at Roselle Park in Union County. A second guess would be William Bodine’s unmarried sister Jennie Bodine (1861-1949), who was living in Jersey City in 1930 with her two sisters Annie and Carrie, and working as a cook in a private household.

Unfortunately, both Jersey City and Roselle Park are not at all on the way from Belmar to Locktown. I’ll have to find another Jennie.