This post will discuss what I know of the people buried here. There are several photographs of gravestones, some of them were taken by me in 2007 and others by Bob Leith more recently, like this lovely one below. 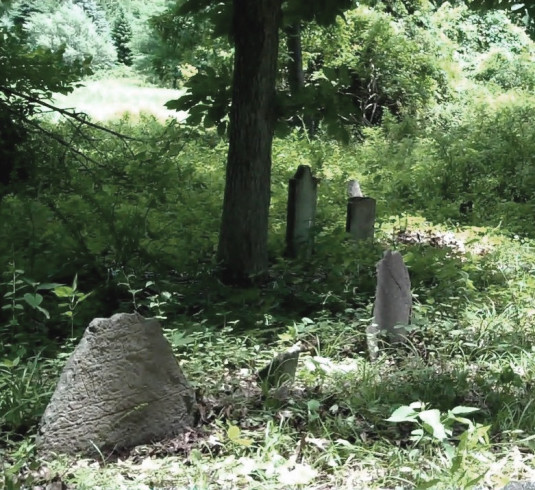 * John Bake Dec. 9, 1826, age 47-0-2 Birthdate calculated from the gravestone would be Dec. 7, 1779. There is some reason to believe he was an English immigrant. A John Bake was taxed in Falls Township in Bucks County in 1806. His first appearance in Amwell Township was in 1822, when he bought the tavern lot at Howell’s Ferry from Ezra Schamp that formerly belonged to Joseph Howell. In his will of 1824, Bake left to Jacob Howell his share in the wheat growing in his field, and to Benjamin Howell he left “A Young Man’s Companion” in token of their friendship. There was no one in his will named Bake. He appears to have died unmarried.1

* Ann Cavanagh wife of John, [died] Dec. 24, 1810, age 20 years, 6 months, 4 days Birthdate calculates to June 20, 1790. I believe that Ann was the daughter of Jacob and Margaret Kyple who lived on Federal Twist Road near Strimples Mill Road. She married Sheriff John Cavanagh on October 15, 1808. The marriage was recorded, and performed by “Covenhoven, J.P.” Snell had stated that she was 22 years old when she died, but that is not exactly the case. As far as is known, she did not have surviving children.

Birthdate calculates to April 19, 1791. I have not identified Hannah’s birth family. She might have been Ann’s sister, but I have no evidence of that. Jacob Kyple died in 1822 in Bucks County. He might have written a will there identifying his children.

Hannah’s stone was found under several inches of soil during our visit there in 2007. When Bob Leith visited recently he found that someone had shot at it. She was unlucky even in death. The photograph shows how the stone appeared after it was discovered buried under the soil.

John Cavanagh, who served as sheriff from 1819 to 1821, is not buried here. He probably left Hunterdon County, as there is no estate for him filed at the county Surrogate’s Court. However, he had serious debt problems, so that may account for it. He lived in the Stockton area and invested in land nearby. Egbert T. Bush wrote of him: “Cavanaugh had retired from the office of Sheriff in 1821. He seems to have gone into business, either as a merchant or by managing an oil mill.”2

Around 1825, he married his third wife, Caroline Schamp, daughter of Ezra Schamp and Rebecca McPherson. His last property transaction took place in 1829 when he sold the 18-acre mill lot in Brookville to Elijah Mitchell. I have not been able to find any record of his death or last place of residence. It’s quite possible he relocated to Pennsylvania.

I suspect this was Hannah Rittenhouse Dalrymple, daughter of William and Catharine Rittenhouse, supposedly the wife of A. H. Dalrymple. She would have been born about 1729, making her about age 69 when she died. I have hardly any information on this A. H. Dalrymple, and no record of Hannah’s marriage. This stone has not been found; perhaps it is buried under the soil.

The photograph shows the letters clearly, and there is no hint that this might be the mysterious A. H. Dalrymple. More likely it is an early Howell. However, no one in the original Howell family (Daniel and Mary Reading Howell) had a known child whose name began with A. Those children were born c. 1718 – 1725, and could easily have died in 1771. The date was inscribed along the top edge of the stone, an unusual thing to do, and one that leads to wear. On Find-a-Grave, the submitter read the number as 1711, which is very early. This date was also shown in the Lambertville Record list. I cannot say which date is correct.

Birthdate calculates to Sept. 27, 1734. This was Agnes Woolever, wife of Benjamin Howell, who was the son of Daniel and Mary Howell (see below). She was the daughter of Jacob Woolever (1701-1774) and Maria Elisabetha Schwitzeler. In 1774 when he wrote his will, Jacob Woolever of Amwell left to daughter Agnes a lot of 19 acres for her life and then to her sons Jacob and Joseph. He named son-in-law Benjamin Howell one of his executors. I do not know whether Agnes had any other children.

We did not locate this gravestone, but it seems most likely that this was Benjamin Howell (1725-1795). Benjamin Howell ran the ferry and tavern at Howell’s Ferry (Stockton) and was the Howell the place was named for. Howell got a patent for his ferry as early as 1746.

Austin Davison wrote that Benjamin Howell died in 1795 of rattlesnake bite, and was buried on the hill above Prallsville with wife Agnes.4 Oddly enough, despite his considerable land holdings, no estate was recorded for him in Hunterdon County. His sons inherited his property.

Another likely Howell gravestone. Could this be Mary Reading Howell? She died in 1732. Jonathan Bosse believes this is the grave of Mary Howell, daughter of Daniel and Mary. In 1733, Mary and Elisabeth, daughters of Daniel and Mary Howell, went to live with their aunt, Catherine Howell Rittenhouse, near Rosemont. But there is no record of her after that, and it seems likely that she died young and unmarried.

“In Memory of Jacob and Leah Lamb son, born Jan. 15, 1815 and died the same day.” Jacob Lambert (1786-1839), son of Joseph Lambert and Mary Holcombe, was married to Letitia Prall (1785-1834), daughter of John Prall, Jr. and Amelia Coryell, on Dec. 23, 1805. I have a list of five children for them, but no son born in 1815. There is a bible kept by the family of William L. Prall, Letitia’s brother, that might provide information. This is the first time I have seen Leah used as a nickname for Letitia. The Lamberts lived in a stone house that John Prall, Jr. built for his daughter, “under the hill near the quarry,” which was very close to the cemetery.

We now begin with the R stones, which must all be members of the Rittenhouse family.

Birthdate calculates to 1754. I have not identified who this might be. The only possibility I can think of is the wife of a Joseph Rittenhouse who was taxed as a single man in Amwell in 1780 on 74 acres. There is an inventory for a Joseph Rittenhouse dated 1831. Really, this one has me stumped. I should note that Bob Leith read’s the date as 1828, but I thought it was 1823. Hard to tell.

This is almost certainly Catharine Howell Rittenhouse, daughter of Daniel Howell and Hannah Lakin, and sister of Daniel Howell of Howell’s Ferry. Older listings consistently identify this stone as “C R” but Bob Leith’s photo shows “C P.” A surname beginning in P makes no sense for this cemetery, so I assume the end of the R got chipped off.

Catharine Howell, born about 1700, married William Rittenhouse in Philadelphia around 1719. It is interesting that they married since Rittenhouse was a first generation German immigrant, while the Howells were English. It is most likely that the Rittenhouse farm just south of Rosemont was conveyed to the couple by Catharine’s brother Daniel Howell, who had gotten a huge acreage from his father-in-law John Reading. William and Catharine had 13 children, several of whom lived to an advanced age. The only two buried here are son Peter, and possibly daughter Hannah Dalrymple. In his will dated Aug. 27, 1761, William Rittenhouse ordered that the plantation where he lived would go to son Lot who was to care for his mother Catharine.

I did not get a photo of this stone. It appeared to be only a footstone. It does not show up on anyone’s list. William & Catharine Rittenhouse did have a son Jacob about whom I know nothing. But there were many other Rittenhouse men whose name began with a J.

Peter Rittenhouse was the son of William Rittenhouse and Catharine Howell. He inherited land southwest of Locktown after his father’s death, and ran a sawmill on the Wichecheoke Creek. One of his sons, Elisha Rittenhouse, has children buried here, and lived for a time on his father’s property near Locktown. His first wife was Hannah Hall, whom he married about 1742. They had at least four children (William, Peter, Elijah and Mary). Hannah is probably buried here, although we did not find her stone. After her death, Peter married her sister Sarah (below), and had five more children (Catharine, Elisha, Elizabeth, Anne and Sarah).

Peter Rittenhouse, son of Elisha and Isabella Rittenhouse, his wife, born 1798. Died 1804. This was the grandson of Peter above.

We did not see these stones on our visit. William and Catharine Rittenhouse had a daughter Susannah born about 1730, about whom nothing else is known, so perhaps she died young.

This is probably the loveliest stone in the cemetery. Sarah was born in 1735, and was Peter’s second wife. His first wife, Hannah Hall, was Sarah’s sister, and died before 1768. Sarah and Peter had five children. The youngest, daughter Sarah, died about 1792, age 12, and might be one of the “S R” stones above. Sarah and Peter had only one son, Elisha, father of Peter above, who was a significant presence in the Locktown vicinity, but is not buried here.

Stachys Rittenhouse [died] April 11, 1827, age 22. Birthdate calculates to 1804/05. I have not identified this name. He could have been a child of Elisha and Isabel Rittenhouse. That son was known as Stacey Rittenhouse. Stachys was probably the way the name was written at the time.

William Rittenhouse (1696-1767), first of the family to settle in Amwell Township and Hunterdon County, probably about the time he married Catharine Howell (see above).

William Rittenhouse wrote his will on Aug. 27, 1761, leaving land to sons William, Peter, Lot, and Moses. He left only 5 shillings to son Isaac, and 20 shillings to the heirs of daughter Priscilla. Personal estate was left to daughters Susannah, Anne and Hannah, and to his widow Catharine. His bequest to son Isaac may reflect the fact that land had already been given to him in Rosemont, where he was the first tavern keeper. William’s will was recorded on April 13, 1767.

This stone was discussed in Rittenhouse Cemetery, part one. . I believe it belongs to John Wright, who died between Nov. 24, and Dec. 29, 1732, and who lived on Route 523 not far north of Prallsville. You can see this stone in the view of the cemetery at the beginning of this article. It’s triangular shape is very distinctive.