The Carolina Constitution of 1669 came out four years after the Concessions and Agreements of the Proprietors of East New Jersey. Undoubtedly, Shaftesbury and Locke were acquainted with it. But when Berkeley and Carteret became the first proprietors of New Jersey in 1664, they probably studied the first Carolina Constitution of 1663 before publishing their Concessions and Agreements. Berkeley and Carteret knew what was happening in Carolina because they were among the eight Lords Proprietors of the colony, so we can assume there was a lot of cross-pollination. 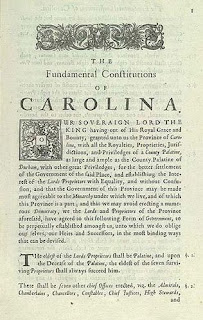 Knowing that the success of a colony depended on having committed residents with means of support through its most vulnerable years, Lord Ashley and John Locke worked together to come up with ‘Constitutions’ for the Province of Carolina in March 1669 that would attract settlers of merit, meaning people from the upper crust.
I would love to know exactly how close these two men were in their philosophy, because the document appears to have a split personality. On the one hand, land was managed by what we consider an ancient and outmoded system: feudalism. Not in America! you say? Well, as it turned out, not very much. The ‘Constitutions’ (with 120 articles) replaced the Charter of Carolina of 1663 and the Concessions and Agreements of the Lords Proprietors of the Province of Carolina of 1665. But they were never popular with the settlers, and were never ratified by the assembly, and were entirely abandoned by 1700. Even so, many provisions were still honored in spirit if not in law. For a depiction of how well the Carolina Constitution succeeded, visit Wikipedia, Fundamental Constitutions of Carolina.
The basic principle of proprietary colonies was that the sovereign, as a feudal lord, could grant land and the right to govern it to whomever he pleased. A feudal colony was dominated by titled and landed gentry, with the Lords Proprietors in England at the top of the hierarchy, having power to decide which measures would be debated in a unicameral legislature. This made sense for a country eager to colonize huge tracts of land without using limited government resources. Feudal land management was the preferred system for the early English colonies. Any colony that was run by proprietors, and that means New Jersey, along with New York, Georgia, Carolina, Maryland and Pennsylvania, had its roots in feudalism. Frankly, this comes as a shock, and I am thankful we so quickly grew out of it.
I have an inclination to think that Shaftesbury (Lord Ashley) was the one who put in the feudalism and Locke was the one who put in the advanced ideas for governing, but it was probably not that simple. In the 1660s, the aristocracy, and the feudal structure on which it was based, was still very powerful and functioning well in England, so Locke may have agreed with it, at least in 1669. At the same time, Shaftesbury has been shown to have been a forward thinker when it came to representative government.

John E. Pomfret wrote that the “Carolina proprietorship, the prototype of New Jersey’s, was . . . a feudal fief rather than a trading company, and it embodied the ideas of a landed nobleman rather than those of a London merchant” [Colonial New Jersey, pg. 22].

Among the somewhat quixotic feudal provisions in the Carolina Constitution was the division of land. The province was divided into counties, which were divided into seigniories, baronies, and precincts, and the precincts into colonies. The civil officers consisted of the governor, called the palatine, plus lords proprietors, and the hereditary nobility, called ‘landgraves’ and ‘caziques’; also admirals, chamberlains, chancellors, high stewards, chief justices, and treasurers. Each county was to have 480,000 acres, which was divided into five parts, one belonging to the proprietors, another to the nobility (landgraves were allowed to own 48,000 acres, and caziques were to own 24,000 acres). The remainder could be owned by non-nobles, although there could be lords of manors. Evidence that John Locke had no objection to this nobility business is the fact that he himself was made a landgrave of Carolina in 1671 and did not repudiate the honor.

The nobles of Carolina were empowered to own serfs (“leetmen”) and slaves. Once again, Locke seems to have been fine with this; he had even invested in the Royal African Company. But he later wrote powerfully against aristocracy and slavery, so it seems he changed his mind. The ‘Constitutions’ was written 20 years before Locke’s better known works.

Another feudal provision was for Quit Rents, which prevented landowners from owning their property free and clear. Quit Rents were small fees based on the amount of acreage owned, and were the feudal tie that bound landowners to the proprietors as lords. In Carolina, the rents did not fall due until 1682, so Ashley, who was ill and would soon die, had no hand in attempts to collect them. Locke is thought to have helped compose the revised Constitution of 1682 which continued the practice of Quit Rents.

On the plus side, there were some forward-thinking ideas applied to land management, like the provision for a registry of deeds and mortgages in each precinct. At this early date, the only other colony to use this idea was East New Jersey.

The ‘Constitutions’ of 1669 provided for a fairly representative government, for the time. Voters were required to own only 50 acres of land, and they were allowed to use a secret ballot. Officeholders had to own 500 acres. Because of this landholding provision, the feudal structure seeped into the government. For instance, veto power resided in the hands of the palatine (governor), along with some of the lords proprietors.

One important innovation was the creation of a bicameral legislature. The Council was empowered to initiate legislation, which the lower house, or ‘parliament,’ could vote on. This arrangement also appeared in the East Jersey Concessions of 1674, and later in Pennsylvania, where it became very unpopular (voters wanted a more powerful Assembly to represent their interests).

Locke and Ashley gave thought to the problem of determining the constitutionality of laws. This was long before the judiciary took that responsibility upon itself, so they had to find another way. Following Shakespeare’s advice, they went in the opposite direction and did away with lawyers entirely, not even allowing them to make comments on the constitution or proposed statutes, lest they cloud them with obfuscations. Instead of amendments, the constitution was to remain unaltered, and to guarantee that laws remained relevant, they were to sunset after 100 years.

Religious toleration was one of the most radical and attractive features of the ‘Constitutions.’ Although the Church of England was the established religion, all religions were tolerated, and ‘dissenters’ were given civil and political rights, making Carolina more hospitable than England was.

I can do no better than to quote Julian Boyd:

“The frame of government and guarantees of right in the Concessions stand in stark contrast to the Concessions and Agreement of 1665 and to the Fundamental Constitutions of Carolina of 1669. The plans of government prepared by John Locke and the Earl of Shaftesbury for Carolina had about them the smell of the closet, but this great application of principles of justice and reason to government [in the West Jersey Concessions] was grounded in solid reality. It grew out of the actual experience of the Quakers as colonists on the Delaware and also out of the harsh realities of suffering they had known in England. The Concessions might indeed be said to be the first expression of fundamental law in the sense of the constitutions adopted by the American states a century later, for this document went as far toward placing sovereign power in the people as it was possible to go in an empire with a monarch at its head” [Fundamental Laws, pg 13].

The West New Jersey Concessions and Agreements of 1676/77 was based principally on Quaker ideals of self-government, as set forth in the writings of William Penn and in the pamphlet by Edward Byllinge titled “A Mite of Affection,” in 1659. But there is reason to think that the Concessions’ author (probably Byllinge) took into consideration the Carolina Constitutions. [Note: I have not established a link between Penn or Byllinge with Shaftesbury and Locke, other than that Penn decided to keep his distance from Shaftesbury’s petition of 1680.]

Sydney Fisher has written that one of the ground-breaking aspects of the Carolina Constitutions was the attempt to replace the model of a trading corporation so widely used in other places with a strictly local government, dependent on the residents more than the merchants of England. The West New Jersey Concessions based the government on the consent of the proprietors, freeholders and inhabitants of the province, creating a far more inclusive electorate than the Carolina Constitutions. And it gave enormous power to the Assembly to instigate as well as pass the laws. So, the principle of local government was even more powerfully adhered to in West New Jersey than it was in Carolina. The Concessions also adopted the Carolina idea of being able to plead for oneself in court.

One of the strongest links between West New Jersey and Carolina was the treatment of unconstitutional measures. The Concessions declared that the constitution could not be violated by any member of the Assembly, and anyone attempting it would be treated as a traitor. Like the Constitutions, the Concessions provide for religious freedom, but unlike Carolina, there was no established religion. Like Carolina and East New Jersey, West New Jersey also adopted the provision for a local registry of deeds.

West New Jersey was deprived of the colorful hierarchy of nobility planned for Carolina. The proprietors of West New Jersey morphed from a feudal institution into a modern corporation, especially after the Crown began interfering in local government. In Carolina nobility was too imbedded in its government to allow for such a change. It limited its lord proprietors to eight men, while West New Jersey allowed its non-noble proprietorships to be divided among hundreds of owners. As Maxine Lurie wrote, “Multiple proprietorships in their actual operations early on combined feudal fief and company. As feudal arrangements broke down, the New Jersey proprietorship ultimately became simply a company” [“The Unique Proprietary,” pg. 97].

Creating governments in the English colonies was left to the people who were granted the colonies by the crown, and by people who had the largest financial stake. It was in their interest to make the colonies as attractive to settlers as possible. In a sense, the market for settlers provided an opportunity to experiment with government, something that had been completely out of the question in England. When the Crown decided to reign in these new governments, it found itself in a new relationship with its colonial citizens, one in which those citizens expected to have their say. This was exactly the opposite of the absolute monarchy that James II tried to establish in England. He failed, and thereby lost his throne in 1688.

Sydney George Fisher, Evolution of the Constitution of the United States:  Showing that it is a Development of Progressive History and not an Isolated Document Struck Off at a Given Time or an Imitation of English or Dutch Forms of Government. Philadelphia: J. B. Lippincott Company, 1897, 1910.

John E. Pomfret, “The Problem of the West Jersey Concessions of 1676/77,” Wm & Mary Quarterly, 3rd ser., vol. 5, no. 1 (Jan 1948), pp. 95-105. Pomfret thought Edward Byllinge was the probable author, based in part on Byllinge’s A Mite of Affection Manifested in 31 Proposals written in 1659, which contained many items similar to those in the Concessions [pg. 101]. But Pomfret makes no reference to the Carolina Constitutions. See also, Pomfret, Colonial New Jersey, pg. 22.

« Coxe and the Colonies, Part One » Daniel Coxe, Merchant Investor