After a few years spent mixing with the virtuosi in London and playing with volatile salts in his laboratory, Daniel Coxe bethought himself to get a wife. He married Rebecca Coldham, the daughter of John Coldham, Esq. of Tooting Graveney, London. I’m not kidding; Tooting Graveney, actually has its own page in Wikipedia. It is considered a suburb of London, on the south side of the Thames, and was probably quite rural in the 1670s. John Coldham was an Alderman of London and warden of the Grocers Company, from which I conclude that he was a successful merchant with political connections, an ideal father-in-law for an ambitious man.

Daniel Coxe and Rebecca Coldham married on May 12, 1671, and moved to Aldersgate Street. Aldersgate was an old gate in the ancient wall of the City of London. In 1676, Mr. and Mrs. Coxe got a new neighbor, Anthony Ashley Cooper, the earl of Shaftesbury (previously known as Lord Ashley). Shaftesbury had been living in Exeter House in the west of London, but in 1676 moved to Thanet House in Aldersgate Street. There and at the Swan tavern he held meetings with others who shared his political views, which boiled down to fervent opposition to absolute monarchy. The group that associated with Shaftesbury came to be known as “Whigs” (a derogatory term for Scottish Presbyterians). 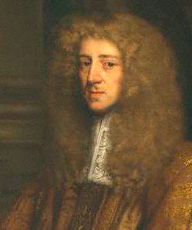 Shaftesbury was not only interested in politics. In the 1660s he had become acquainted with John Locke and Locke’s theories of medical science. This was fortuitous for Shaftesbury, as he suffered chronic pain from a liver infection. Locke became a sort of personal physician to Shaftesbury and succeeded in having him operated on. The success of the operation put Shaftesbury in Locke’s debt for saving his life. This was the same time that Coxe was doing his chemical studies, and shared an acquaintance with Robert Boyle, who was also a friend of Locke’s. I have no evidence of it, but I think it likely that Daniel Coxe became known to both Locke and Shaftesbury before Shaftesbury and Coxe became neighbors in 1676.

Shaftesbury had been created earl and Lord Chancellor in 1672, and at that time was one of the most powerful members of the court of Charles II. But he did not remain in government long. When Charles went ahead and made a royal Declaration of Indulgence, suspending penal laws against Catholics & Dissenters, Shaftesbury become disenchanted and resigned from the government in 1673.

Then in 1678, there was a surge of anti-Catholic feeling after the fictitious “Popish Plot” or “Meal Tub Plot” was revealed by Titus Oates, in which Catholics were supposed to be plotting the assassination of the king. Parliament began threatening members of Charles II’s inner circle who were thought to be secretly negotiating a treaty with Catholic France, so Charles dissolved the Parliament in January 1679. A new Parliament assembled in March and introduced the Exclusion Bill, to bar Catholics from being crowned monarchs in England. Shaftesbury was a key player in this movement. But Charles dissolved Parliament again.
Note: Samuel Pepys, who had stopped writing his famous diary in 1671 due to failing eye sight, was imprisoned in the Tower in May 1679 along with others suspected of negotiating a treaty with France, but was released after one month.

Late in the summer of 1679, Charles II became gravely ill, which brought his brother James Duke of York running to his side from his semi-exile in Brussels. The presence of this Catholic heir to the throne added a sense of urgency to the Exclusion Bill. When Charles recovered, James was determined to remain in England, but he was persuaded instead to spend some time in Scotland, to avoid being the lightening rod he was for the supporters of Exclusion.

Before leaving, James celebrated his birthday on October 14th by managing to have Shaftesbury dismissed as lord president of the privy council. This gave Shaftesbury the status of a martyr among those opposed to a powerful monarchy.

By the fall, petitions were circulating asking Charles to call the Parliament on Jan. 29, 1680, the day to which it had been prorogued. Petitioning in 17th-century England was a risky business. Soon after Charles II was restored to the throne in 1660, an act was passed by Parliament prohibiting ‘tumultuous petitioning.’ It was meant to prevent a recurrence of the civil war. No mass petitions were circulated again until 1679.

Sometime during 1679, John Locke returned from France, to find London in political turmoil. This may have inspired Locke to write his Second Treatise on Civil Government. Locke signed the London petition, as did Shaftesbury and Daniel Coxe, as well as many other residents of Aldersgate Street. William Penn thought that matters had become so ‘violent and irreconcilable’ that he decided to stay out of the fight.

In November 1679, Charles issued a proclamation against tumultuous petitioning, which made all petitioners vulnerable to arrest. To make his meaning clear, Charles had royal troops drawn up, but people kept signing the petitions anyway, some making the bold statement that petitioning was a citizen’s right.

The ‘Monster Petition’ was presented to the king on January 13, 1680. He did not think much of it. When January 26th came around, Charles prorogued the Parliament again. So much for petitioning. Sentiment began to shift away from the petition movement, with some fearing that Protestants were bent on making the Duke of Monmouth king, rather than James.

As for Shaftesbury, his luck ran out. The political winds shifted in favor of the monarchy and in 1681, Shaftesbury was charged with treason. Fortunately, the jury acquitted him; ten members of the jury had signed the ‘Monster Petition.’ But recognizing the danger of remaining in London, Shaftesbury went into exile in Holland and died there in 1683.

What perplexes me is that despite the fact that Coxe had sided with dissenters and Whigs by signing the petition, he was admitted as an honorary fellow to the Royal College of Physicians in London on September 30, 1680. I am guessing he became a physician to the king about this time, although it doesn’t seem to make sense. Coxe must have found a way to mute his grievances and make himself acceptable to the king. This suggests a very flexible fellow.

But I am not done with Daniel Coxe yet.

Note: Information regarding the ‘Monster Petition’ came from Mark Knights, “Petitioning and the Political Theorists: John Locke, Algernon Sidney and London’s ‘Monster’ Petition of 1680.” Past & Present (Oxford Univ. Press), no. 138 (Feb 1993), pp. 94-111.
Addendum, 4/23/2010: Added the exact date that Coxe was admitted to the Royal College of Physicians.
Correction, 4/25/2010: Replaced the portrait of the 3rd Earl of Shaftesbury with the 1st Earl, Lord Ashley.

« Why Read History? » Coxe and the Colonies, Part One