When Daniel Coxe began investing in land in the English colonies, he hired explorers and corresponded with them eagerly. He also corresponded with colonial governors and with the principle Indian traders. This activity became more focused in the years after he sold his proprietorship of West New Jersey. It would be fascinating to read these letters; I assume they are tucked away somewhere in England.

Coxe was learning all he could about the potential riches to be found in the new colonies. On October 15, 1687, Coxe had designated Adlord Bowde, “late of Hertford, draper, now bound for Burlington,” to be his land agent. I cannot help but wonder how being a draper prepared Bowde for dealing with Indians and uncooperative Quakers. During the rule by the Dominion of New England, Gov. Coxe was “incommunicado with the colony,” and used that time to increase his holdings by purchasing more proprietary shares. When Adlord Bowd became his agent, Coxe owned 12 proprietary shares which he increased to about 20 full shares. Bowde lost no time in purchasing huge tracts of land from the Indians, preparatory to getting warrants to survey lots within those purchases.

It was Adlord Bowde’s job to convert Coxe’s shares into tracts of land with title established in Coxe’s name. On March 30 and April 9, 1688, Adlord Bowde acquired something over 30,000 acres along the Delaware River, north of Trenton. He purchased this property on behalf of Daniel Coxe, not on behalf of the proprietors of West New Jersey. I suspect a determined lawyer could have made a case out of this, but none was made.

The northern boundary of this purchase became the southern boundary of the Lotting Purchase, a huge Indian purchase of 150,000 acres which would be made in 1703. This line is different from the jagged line associated with the north boundary of Hopewell Township. That line was created by surveyors laying out the property that was allowed to Coxe by virtue of his proprietary shares. The fact remains that some land north of the Hopewell Township line was purchased from the Indians in 1688 and thereby becomes the first purchase from the Lenape by a European of land in what became today’s Hunterdon County. 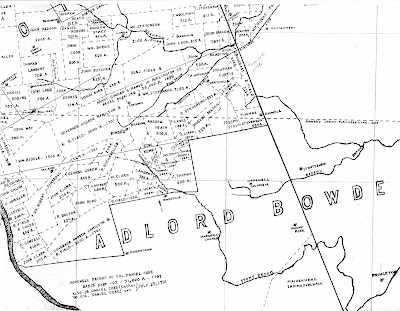 This is part of a map drawn by D. Stanton Hammond in 1963, showing the northern line of Bowde’s purchase. In order to see it, you must click on the picture to enlarge it. Then look for the dotted line that runs through the middle of the map.

Here is the abstract for the two land purchases from N. J. Archives:

March 30, 1688,  Indian Deed. Hoham, Teptaopamun and other Sackimackers to Adlord Bowde, now of Burlington, merchant, for Gov. D. Coxe, for tract on Shabbicunck Creek, along road to NY, 3 miles from Falls of Delaware, along Tho Budd past Menapenascon to mouth of Laocolon Creek above Mecokins Wigwam, thence down along the Delaware to 2 miles above the falls, thence E. to Shabbicunck Cr. [no acreage given; WJ Deeds B1: 179].

April 9, 1688, Indian Deed. Hocham, Kepanoockonickon, Romasickamen, Tiptaopaman and Vevenutting, Sackimackers, to Adlord Bowde, on behalf of Gov. Daniel Coxe, for a tract from Tho Budd’s line NW to the Northbranch of the Rariton R. down said river to the road from Delawar Falls to NY, along road to another point in Budd’s line over the Stony Hills on the east side of milstone River, thence NW, SW to bgn [no acreage given; WJ Deeds B1: 181].

This huge Indian purchase alarmed the newly-formed Council of West Jersey Proprietors, so they summoned Bowde to meet with them. The outcome of that meeting was that Bowde was permitted to “take up dividends of 62,400 acres on Coxe’s proprieties” [Pomfret 1964:71]. Half of this was in what was called “the northern purchase” which amounted to about 36,000 acres.

Adlord Bowde died probably in December of 1688. Administration of his estate was initially granted to James Budd, and after James Budd’s decease in 1690, to Susanna Budd, wife of Thomas Budd dec’d. But none of them made an account of the estate. Thomas Budd did not die until 1698, so it’s hard to understand how his widow could have been granted the administration. This is because six years earlier, on Oct. 14, 1692, administration was granted to Jane Scott of Lewis, Sussex Co., PA, widow of Issac Bowde, merchant. The entry says:

In any case, with the death of Adlord Bowde, Daniel Coxe needed a new agent in West New Jersey. It took awhile for him to select one, but by August 1689, he settled on John Tatham. This was shrewd since Tatham had been a member of the Council of Proprietors since its inception in 1687. Tatham also served on the commission of 1688 from West New Jersey in the negotiations over the province dividing line, and had lately moved to Burlington from his home in Pennsylvania. On the other hand, Coxe’s choice was a foolish one since the wealthy Tatham was not a Quaker, which made his motives suspect among his neighbors and did little to promote support for Gov. Coxe.

As an absentee governor, Coxe had to depend on his Lt. Governor John Skene. According to John D. McCormick, Coxe named Edward Hunloke to act as Deputy Governor, presumably in place of Skene, but soon afterwards he named his agent John Tatham to the position. But the West Jersey Assembly would not give their approval for Tatham because of charges that he was a Jacobite [Pomfret 1956: 158; Smith pp. 191-92]. In the case of Tatham, such a charge mostly likely meant that he was a Catholic. John D. McCormick has discovered that in fact Tatham was a Catholic, a story I will save for another post.

So John Tatham did not act as Coxe’s deputy governor after all. However, he did continue to act as his agent in matters of real estate. One of his first acts was to carry through with obtaining title to the 62,400 acres of land allotted to Daniel Coxe, much to the alarm of the West Jersey Proprietors.

Residents of West New Jersey were probably even more unnerved when Edmund Andros, Governor of the Dominion of New England, visited Burlington on August 18, 1688. That was his only visit, but I am sure it was more than enough. Andros did not have the demeanor nor the temperament to make a good impression on Quaker farmers and merchants.

Here I will take my leave of Coxe’s landholdings in or near Hunterdon County to describe (in my next post) some of the other things Coxe was planning for West New Jersey.