An interesting view of 19th century rural cooking from the perspective of one who grew up on it, and was able to compare it to the food available in the 1930s, when food processing had begun to be modernized. Commercial food production was just coming into its own back then. If Mr. Bush could take a stroll down the aisles of today’s supermarkets, he would be astonished, and probably dismayed. In many ways things have gotten worse.

But they have also gotten better, especially in Hunterdon County. We have access to wonderful locally grown produce and natural ingredients, especially in our many local farmers’ markets. And today there are many creative cooks who have figured out how to make better use of some of these ancient cooking techniques, as well as new ones.

So let’s take a trip back to the 1880s and let Egbert Trimmer Bush show us what it was like.1

None Quite Like the Genuine Made in the Old Days.
Gilbert Liked Pickled Pork

Who remembers buckwheat cakes? That is, real buckwheat cakes—cakes that were closely related to the blooming buckwheat fields of old; not cakes that can trace no more relationship to those old-time beauties, than a Laplander can to a South Sea Islander. Not the pale, aenemic [sic] products of the restaurant, conveniently called “pancakes,” because it would be impossible to give them a name suggestive of the ingredients. Or would it, rather, be indiscreet? Anyhow, the broad and almost meaningless name of “pancakes” is safe because nobody can offer any objection to the “pan,” and possibly somebody might be so foolish as to imagine that it meant buckwheat; for there are still among us, old appetites so debased as to be each crying inaudibly, “Gimme buckwheat cakes!” 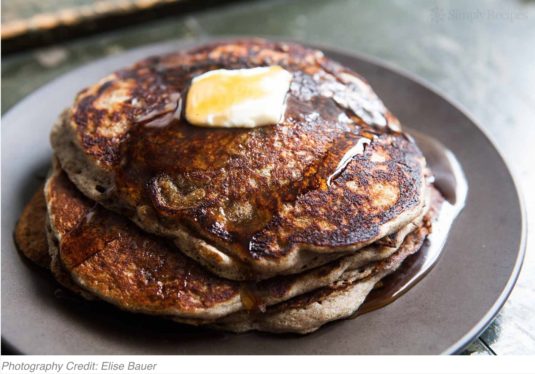 But few old-timers are fooled. You rarely catch one asking for the undesirable substitutes. Once caught, he does not “bite” again. Paraded under whatsoever name, the sickly things have no further attraction for him. Those bearers of the old-time taste have watched with painful misgivings the gradual decline of what purported to be their old favorite. Though trembling for the final result, they hardly dreamed of the depths to which the purveyors of villainous substitutes for good old buckwheat cakes, would descend in their abuse and misrepresentation of what was so highly appreciated by many generations of hardy Americans. And these Americans did grow husky and many of them did grow old, in spite of all that modern salesmanship has been able to say or “procure to be said” against their stable old articles of diet, especially against buckwheat cakes. For it does appear in evidence that heaviest dietetic artillery has been mercilessly directed against the buckwheat field.

Two things must be conceded, however. These gunners have secured effective artillery, and have used it with (mathematically) scientific skill against the deadly white bloom which made the newly-set orchards and the rolling hills so beautiful in the days gone by. Only here and there can now be found a scrawny patch of buckwheat, generally, to appearance, not daring to show itself in old-time splendor or to promise heavy production for fear of attracting the wrath of its enemies. The field of buckwheat blooms no more as of old, and the bake iron is as bloomless as the field; for, do what you will—mix all the other ingredients you can think of or use the most conglomerate of the widely-advertised substitutes—and you will still fail to produce the bloom, the smell or the flavor of the brown old buckwheat cakes.

Of course, I know that buckwheat was a “horrible” kind of food, calculated to produce almost any of the ills that a flesh is heir to; at least, having been told so often, there is no excuse for ignorance of such alleged scientific facts as these. But, after all, buckwheat cakes were so good! And it does seem that I have known people whose early lives—whose whole lives—were “poisoned” by this culinary diabolism, and who, in spite of all, managed to live to a hale and hearty old age. Farewell, thou good old buckwheat cake! One fain would sing thy praise; but, gifted not with art of song, would prove his faith in other ways—by eating thee as joyfully as in the earlier days.

And there was the old “Trimmer stew,” another abomination, no doubt, but somehow good for ignorant folks like us, who ate in faith and knew no better, nor ever sought to know. The principal ingredients in this stew were sliced potatoes—not potatoes cut into chunks of any haphazard size or shape, but potatoes sliced to as uniform thickness as might now be done by improved machinery—and a liberal proportion of sliced pickled pork evenly distributed throughout the mess. Together with judicious seasonings, these were slowly, very slowly stewed down; that is, stewed and stewed until all were tender, but little broken up, and then further carefully stewed until most of what had been stewed out of the ingredients seemed to be stewed back into them, and the whole would heap nicely on one’s plate, with never a scorched piece in the lot. “Horrible stuff,” did you say? Of course. Anybody would know that now. But if ignorance is ever bliss, we were in an enviably blissful state. We never even suspected the horror of it, never wanted to be suspicious or informed, and accordingly enjoyed the dish very much.

Why was it called “Trimmer stew?” Well, as to that, your guess would probably be as good as anybody’s. I would not pretend to tell. All that could be known on that important matter might be summed up in this:

The dish was evidently of German origin. So were the numerous Trimmers and offshoots of Trimmer blood in a wide circle around. And it was noticeable that wherever there was a Trimmer or an admixture of the blood, that stew was a standard article of diet, highly relished and acceptable on almost any occasion. Others of the community “fell in with the majority,” of course; but as to the true origin of the name-well, draw your own conclusion.

The good old practice was, to make the stew of very liberal proportions, so as to insure plenty of the “left-over.” And this left-over was always a special delight. Heat it again for another meal, slowly, thoroughly and with the addition of just enough vinegar—vinegar, mind you, not slop—and there was a feast fit for anybody, from farmer or laborer down to king or congressman. Produce that dish now, and you may have all of the “French fried,” “Saratoga chips” or other catchy pretensions, only remember to give me the Trimmer stew “warmed up in vinegar.”

Of course we had other things to go with buckwheat cakes and the delicious stew. There was always in the cellar, or buried in the ground for winter, a generous supply of beets and turnips and cabbages. From the cabbages was made delicious coleslaw, not for mere tasting, but for eating. The cabbage was cooked, not boiled but thoroughly heated, the long shreds of it being left just as they bad been sliced from the head, to be manipulated by the consumer as he saw fit. Nothing was cooked with it except the seasoning and enough vinegar to suit the taste. Very good indeed, when made just right. But again, of course, a very plebian preparation, much too atrocious for modern consumption.

Pickled pork was a standard article with some, boiled in great, thick chunks of side meat so fat that it quivered as it lay on the plate to be cut for serving. Such meat is now usually rendered into lard, and probably always should have been. But there were those who liked it very much. One day at dinner our old friend Gilbert expressed his appreciation of it in his own way. The server said, “Gilbert, will you have some of the pork?”

“Ahem,” said Gilbert, “I’ll take a small piece, if you please, about the size of a smoothing iron.” And that was no exaggeration of Gilbert’s capacity for that delicacy.

But we must not forget the good old home-cured ham, smoked at home with smoke from wood carefully selected to give just the right flavor, smoked long and patiently, until well dried and beautifully browned—not smoked with a brush or by dipping into a solution of creosote.

Nobody is pretending to say that the old-time cooking was better than the modern, when real cooking is done at all in these days. But some of the old-time preparations were certainly hard to beat, even with all of the modern domestic science added to the experience of ages. And when we decipher the records on old tombstones, with ages running from 80 to 99, we stop and wonder. Did the people of past generations know the things that were really good for themselves? If not, how did it happen that so many of them went to their final rest so late? Really, it does appear that those old people lived long and then sank quietly to sleep, untroubled by any thought or care about what future generations might say of their unwholesome food or unsanitary manner of living.