Grace wondered about the distinction between East-West v. North-South New Jersey. This all goes back to the state’s geography and the  way it was settled.

Earliest settlements were along the Hudson River and the Delaware River. It is these two rivers, plus the Atlantic coast, south of the Hudson, that determined the earliest settlement patterns. Remember, in the mid-17th century, traveling overland was a pain, and could only be done on horseback if you knew how to find the Indian trails. The preferred method of transport was by water, because by water you could easily move heavy and bulky goods. So the rivers attracted the populace.

The next determining factor was the decision by James Duke of York to give the colony to two men, albeit jointly, in 1664. One of the men was active in promoting settlement, the other was indifferent. The active man, Carteret, sent settlers who joined with others to create the earliest towns, located close to old New Amsterdam, now New York (not yet a city). There were already Dutch settlers in Bergen County, and some New Englanders who moved to eastern New Jersey as soon as the English took it over.

On the Delaware River, there were a few Dutch and Swedes in residence before 1664. But English settlement there had to wait until John Fenwick and his band of colonists showed up in 1675, followed by other Quaker settlers in 1677 and afterwards. So, the east side of the colony got a ten-year head start.

Carteret’s east-facing half was separated from Berkeley’s west-facing half by the Quintipartite Deed of 1676. The parties agreed that the whole of New Jersey would be divided between the two original grantees by a line from Little Egg Harbor to a point somewhere near where the Delaware River enters New York State. This line was not surveyed at the time of the deed, so no one was exactly sure where it ran.

Here’s an amazing map dated about 1675,* looking at New Jersey from the east, in which West/South Jersey looks considerably larger than East/North Jersey. It shows how little people knew about the colony at that time. The original map is held in the State Archives at Trenton. 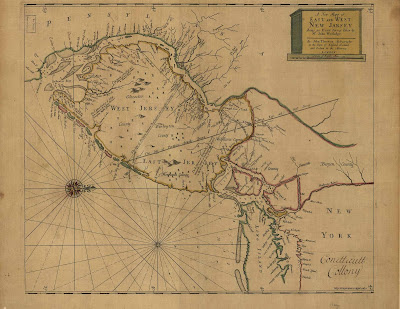 As you can see, East New Jersey has all of the northern half and a little of the southern half. (The mapmaker seems to have known nothing about Sussex County in the northwest.) West New Jersey has all of the southern half, including the Pine Barrens. So even though it looked as if the division was more than equitable for West/South Jersey, it was not, since East/North Jersey got the best land. This probably helps to explain why over the years West/South Jersey has been considered a poor cousin to East/North Jersey. Also, there is the difference between New York and Philadelphia as magnets for population growth.

The whole subject can be a prickly one, especially if you’re from West/South Jersey, and concerned about getting the short end of political and economic sticks. There was a discussion of this not long ago on the H-NEW-JERSEY List [H-NEW-JERSEY@h-net.msu.edu, Subject: “Query: North Vs South”].

As for the original dividing line between the two halves of New Jersey, once the two provinces were united as a royal colony in 1702, the only purpose for the old line was to separate the Proprietors of East Jersey from the Proprietors of West Jersey. They were owners of all land in the two sections that had not yet been sold, and maintained the separation in order to maintain their own continuing existence. I’ve never read of anyone proposing to combine the two organizations, but that probably never happened because it would have been a book-keeping nightmare.

Functionally, however, the dividing line has shifted to the ‘waist’ of the state, that middle section where the distance between the Delaware and Raritan Bay is the shortest. This was the route of the earliest main road in the state, linking New York with Philadelphia, and there isn’t a single early traveler’s account that doesn’t include taking this road, except I suppose for George Fox, who traveled through the woods across New Jersey in 1671.

Geology also divides the state this way, with the hilly Piedmont separating from the flat Coastal Plain at just about the same place as the route from Trenton to New Brunswick. If global warming gets really serious, we may lose much of West/South Jersey, since it is so much closer to sea level than East/North Jersey. I hope that never happens because, being a resident of Hunterdon County, I think old West Jersey is a wonderful place to visit, and I’m sure it’s a wonderful place to live.

* Correction (7.21.10):  The date of the map must be much later than 1675, since it shows property surveyed to Daniel Coxe. Rutgers dates the map as 1700. It is known as the John Worlidge Map, published in London. Regrettably there is no date on the map.