How to Survive in West New Jersey 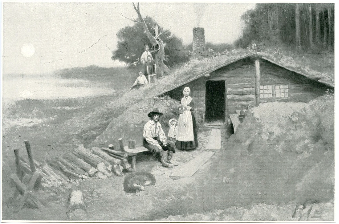 Recently a friend, Ian Schoenherr, sent me a copy of a painting by Howard Pyle that beautifully depicts the life of the first settlers along the Delaware River.

This picture was an illustration for an article written by Woodrow Wilson called “Colonies and Nation,” published in Harper’s Monthly Magazine in 1901. It was meant to show a family of Quakers and their home along the Schuylkill River (which is why the sun is setting over the river). But it could just as easily have been along the Assunpink or Raccoon Creeks in West New Jersey.

Ian writes a blog on the work of Howard Pyle, and I am sure he knows more about this painter than just about anyone. You can visit his blog to see an early Thanksgiving scene by Pyle.  It won’t be what you expect.

Obviously Pyle had no first-hand experience of living along the Delaware in the 1680s, but I think his depiction is credible. These people had to shelter themselves quickly so that they could begin the work of clearing fields and planting crops. All without benefit of machinery. Their toughness and resilience amazes me and fills me with admiration. Doesn’t matter if they were nice or not.