On February 2, 1684, Charles II, only 54 years old, suffered a stroke. Perhaps he might have survived it, but given the medical practices of the day, he was doomed to die, which he did four days later. His brother James was now King of England.

It was following the inauguration of James II that Jennings and Budd submitted their letter of protest concerning Gov. Edward Byllinge to the auditor-general of the colonies. They were probably thinking that James as king would be sympathetic to their cause, but apparently James never even saw their letter.

As king, James became far more aggressive toward the colonies. He had never given away New York as he had the Jerseys and Delaware, and now he was regretting his former generosity. A hint of the trouble to come was a Writ of Quo Warranto issued in August, 1685, in which the provinces of Rhode Island, Connecticut and East and West Jersey were ordered to justify their charters or patents, with the intent of revoking them and turning them into colonies of the Crown. The Writ, which had been triggered by complaints from New York about the failure of New Jersey-bound ships to pay customs, was served to the proprietors in London.

At the Assembly session of May 12-13, 1685, there were ten representatives from the first and the second tenths, seven from the third tenth, two from the fourth tenth, and ten from the Salem tenth, for a total of 39 representatives. Their first order of business:

“The Assembly, upon the considerations mentioned in the last Assembly, agree and resolve, to continue things upon the same foot and bottom as formerly, until matters shall be controverted in England, or the King’s pleasure be further known therein” [Leaming & Spicer pg 499].

They were probably waiting to hear if the appeal by Jennings and Budd would succeed. In the meantime, they named Thomas Revel clerk of the Assembly. They named a Council to act with the Governor, and several justices and commissioners for the tenths.  Mahlon Stacy, Daniel Wills, and William Emley were chosen to conduct land purchases from Indians, with assistance from Gov. Thomas Olive. Daniel Leeds was again general surveyor. They named Constables and Commissioners for laying out highways for the tenths.

Then the Assembly adjourned until the third of the ninth month (November), unless called to meet sooner by the Governor and Council. When the Assembly met again, on November 24, 1685, one of the representatives for the Third Tenth (Gloucester) was John Reading

At the Burlington Court session of August 1685, deputy governor Thomas Olive presiding, the Freeholders of the Third Tenth were ordered to lay out 2000 acres for their Towne bounds [a township, as we understand it], and 400 acres for their Towne. The impetus for this order probably originated with the residents themselves. Everyone then living in the Third Tenth was to have a share of the allotment, according to the number of their proprietary shares. They should apply for warrants for surveys to be returned at the next Court following the survey. The town lots were to be considered part of the owners’ total share of land. One might say that August 1685 was the birthdate of the town of Gloucester.

Another Straw in the Wind

Although there was no immediate impact on the residents of West New Jersey, a profound change took place in France on October 18, 1685. This was the Revocation of the Edict of Nantes. Up until this time, Protestants in France were tolerated to a certain extent. With the Edict revoked, they could no longer practice their religion. This triggered a major exodus of some of the most talented and ambitious citizens of France, many of whom made their way to America, often by way of England. This process of emigration took place over many years. Some names of families that eventually arrived in Hunterdon were Coursen, Hegeman, Lambert, La Rue, La Tourette, Lequier, Petit, Piatt, and Runyon.

While waiting to hear if their appeal would be successful, Thomas Budd occupied himself by writing a pamphlet titled A True and Perfect Account of the Disposal of one Hundred Shares or Proprieties of the Province of West New Jersey by Edw. Bylling. In those days, pithy titles were not as fashionable as now. Budd labored to show that Byllinge had no legitimacy as “chief proprietor” because the proprietary shares had all been sold to others, while ignoring the fact that Byllinge had repurchased a significant number. In a second pamphlet, called Good Order in Pennsylvania and New Jersey in America, Budd acknowledged his error, and went on to extol the wonders of his new home. He wrote that his 5,000 acres cost him £100, which he got from selling 1,000 acres to ten families. He made the rest of his land profitable by indenting 50 servants to work the land. Budd praised the qualities of the water and soil, but was probably a little optimistic when he forecast that Pennsylvania, with its new French settlers, would be able to produce wines that would compare to those of France. 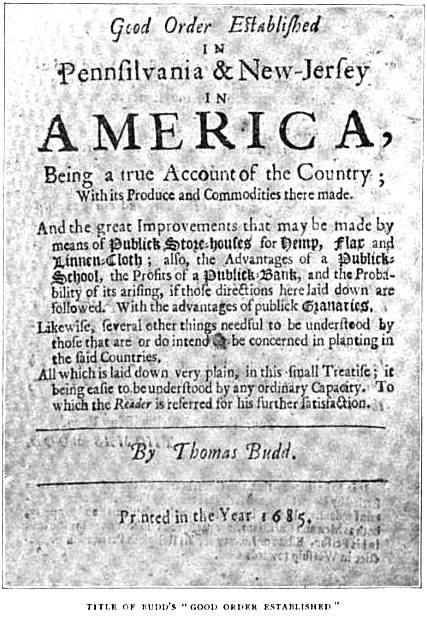 The dispute between the West Jersey Assembly and Edward Byllinge was upsetting to George Fox, especially when Thomas Budd published his pamphlet discrediting Byllinge. Fox did not want any sort of dispute or rancor among Quakers to become public, probably for good reason, since Quakers were constantly persecuted by the legal system of England, and those who upheld it.

No one can say exactly when John Reading arrived in the third tenth. He married his wife Elizabeth on February 22, 1681/82 in Lichfield, Staffordshire England. Sometime between that date and 1684, he and Elizabeth made the journey to America, along with the thousands of others who came in the wake of William Penn. His brother Daniel seems to have come with him.

We know that John Reading was present in the vicinity of Gloucester sometime in 1684 because a court case of 1688 in Gloucester County included testimony about Reading arranging for a survey of land adjacent to one John Ithell in 1684.

In May 1685, Ithell took Reading to court in Burlington, challenging Reading’s claim to 15 acres of meadow on “Steeles branch.” The court ordered the two gentlemen to take their dispute to the Commissioners of the third tenth. The town of Gloucester was not ordered to be laid out until August of 1685, and as yet had no court of its own. Over the years, Ithell proved to be a thorn in Reading’s side.

John and Elizabeth Reading had a daughter Elizabeth born on June 5, 1684. She may have been born in England shortly before the Readings left, or on shipboard, or in West Jersey. Sadly, she died in 1692 at the age of 8.

Reading came to West Jersey armed with proprietary rights enabling him to begin amassing a large landed estate. And he came with an education that quickly made him recognized as a local leader. John Reading was born on September 14, 1657 in Staffordshire, England, the son of John and Mary Reading. John and Daniel were listed with their parents as Quakers in the records of Herefordshire in 1668, along with brothers Job and Jonah.

John Reading’s father purchased a one-fourth share of a propriety in West New Jersey on August 28-29, 1677. But he never acted on it. Instead he moved from Heredfordshire to London and became a successful merchant. I do not know when he died or if he left a will mentioning his son John. In 1700, John Reading Jr. was asking the Council of Proprietors for surveys “in right of John Reading his father.”

What prompted John Reading Jr. to take his new wife with him to New Jersey? By 1684, the governorship issue had been resolved, making the move less risky. And the buzz about the Delaware River valley at this time must have been compelling. Whether Reading came to West Jersey as a practicing Quaker is a question that goes unanswered. As far as I know, there is no record of his attendance at Friends’ Meetings.

Having had his fill of the independent-minded Samuel Jennings, Edward Byllinge named a more compliant man to be his new deputy governor. This was John Skene of Burlington. It is hard to know when Skene received this commission, because he did not begin to act on it until November 1685.

John Skene, a native of Scotland, is thought to have arrived in Burlington in 1682, in company with two other members of the Masons. During that year, Skene had 300 acres surveyed for himself in the Second Tenth [Revel’s Surveys, pg 36]. Ironically, this property was adjacent to that of Samuel Jennings.

On November 3, 1685 when the Burlington Court was called to session, John Skene appeared and produced his Commission as Deputy Governor. Immediately after it was read, Skene ordered the Magistrates who were sitting on the bench to “forbeare further acting” [Burlington Court Book, pg 47-48]. They duly left the bench and the court was adjourned for at least ten days. During that time, Skene had Byllinge’s opponents (Francis Davenport, Robert Dimsdale, William Peachee, Robert Stacy and Daniel Wills) removed from the bench.

When the Court reappeared on Dec. 15, 1685, new language was read to introduce the court and acknowledge the authority of King James and Governor Byllinge. New members of the court were Skene, William Biddle, Elias Farr, and Richard Guy. Members who had been retained from the old court were James Budd, Thomas Gardner and George Hutcheson.

The Assembly of November, 1685

The Assembly, which was to meet the same day as the Burlington Court, Nov. 3rd, did not meet until Nov. 25th, at which time John Skene presided as Governor [Leaming & Spicer, pg 503]. At this time, Samuel Jennings and Thomas Budd were back in New Jersey, and both were present as representatives of the second tenth (Burlington). There were ten members from each of the four tenths and the Salem tenth, for a total of 50 representatives. Thomas Olive was chosen as “Chairman,” presumably the equivalent of Speaker.

The Representatives felt compelled to accept Byllinge’s commission to Skene, but they were not enthusiastic. They did so “reserving their just rights and privileges.” Along with his commission, Skene presented the Assembly with a new charter drafted by Byllinge. To buy some time, the Assembly resolved that due to the “sharpness of the season” and since several of the members were “at a considerable distance from their habitations,” the Assembly would appoint a committee to review the charter and make a report at the next meeting.

Perhaps the most troublesome provision of that charter was allowance for proxy voting in the Assembly for the absentee proprietors. It was worrisome because if passed it would give Byllinge control of the Assembly. No wonder they postponed action.