I thought I’d choose for my first post an old Hunterdon family whose roots I have been trying to trace for years. The idea came from a discussion on the Fox family of Kingwood Township that took place on the Hunterdon mailing list on Rootsweb.

With the help of several members of the list, I worked my way through this confusing family and was able to answer some questions that had bedeviled me for a long time. Future families to appear here will also follow that pattern. If I am curious about them, and have taken the time to learn about them, they will be blog-worthy. So, to begin–

There were two separate Fox families in early Hunterdon, one of them from Germany (originally Fuchs), and the other from England. It is the English branch I am following today. 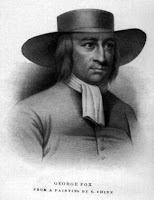 George Fox is known as the founder of the Quaker religion in the 17th century, but he is also relevant to Hunterdon County history. If you want details of the life of George Fox, visit Wikipedia or other sites. There is a 1904 edition of his Autobiography on Google Books. As for how he pertains to Hunterdon County, there are two facts to consider: 1) George Fox actually traveled across New Jersey in its very earliest days of European settlement; and 2) a family named Fox that settled near Rosemont is thought to be closely related to the Quaker George Fox.

First, that trip across the state: It happened in 1671. We know about it because Fox kept a diary of his travels. He began in Barbados, but eventually arrived at New Castle, Delaware, which he called a Dutch town, from whence he began his trek across New Jersey. As you might imagine, it was not an easy trip. In 1671 the only thing resembling a road in New Jersey was an Indian path. In 1671, there were hardly any European settlements on the Delaware River side of the state. The only established settlements were in East New Jersey, at Elizabethtown, Middletown and in Bergen County. Just getting across the Delaware River was dangerous. Fox wrote:

“When we were over we were troubled to procure guides, which were hard to get, and very chargeable. Then had we that wilderness country, since called West Jersey, to pass through, not then inhabited by English; so that we sometimes travelled a whole day together without seeing man or woman, house or dwelling-place. Sometimes we lay in the woods by a fire, and sometimes in the Indians’ wigwams or houses. At length we came to Middletown, an English plantation in East Jersey, and there we found some Friends; but we could not stay to have a meeting at that time, being earnestly pressed in our spirits to get to the half-year’s meeting of Friends at Oyster Bay, in Long Island, which was very near at hand. We went with a Friend, Richard Hartshorn, brother of Hugh Hartshorn, the upholsterer, in London, who received us gladly at his house, where we refreshed ourselves; and then he carried us and our horses in his own boat over a great water, which occupied most part of the day getting over, and set us upon Long Island.”

From that description, we can guess that Fox took the shortest possible route, which would be more or less the track of Route 1. Which means, he did not pass through Hunterdon County. You can find Fox’s Journal online.

George Fox married, but did not have any children. Members of the Fox family who trace their lineage to him must connect with his brother John, born about 1629, and John’s wife Ann Chambers. They married in Leicestershire, England in 1659, and had a son named George, born in 1662. (There are exact dates in online family trees; I cannot vouch for their accuracy, but they give us a general idea.)

It is thought that this nephew of the Quaker George Fox is the one who settled in Hunterdon County. He was christened in 1670 at Horninghold, Leichester, England. In 1693, he married Jane Palmer, also in England. By this time, Quaker George had died (on Jan. 13, 1691) in England. It is most likely that he had shared news of his trip to New Jersey with his family. And it is also likely that the Fox family were aware of Quakers who had begun to settle along the banks of the Delaware River at Burlington, beginning in 1677.

I have found no evidence that the nephew George Fox was a practicing Quaker, or that he was part of the early Quaker emigration to Burlington, even though some family histories claim he arrived with William Penn. I have not yet found any records in Burlington showing that George Fox bought land there. It appears to me that George and wife Jane, with daughter Mary and son George (born Jan 1700), made the trip about 1705. There were other children (Thomas, John and Elizabeth) who might have been left behind in England, although it is possible Thomas, at least, also came to New Jersey.

As far as I know, George Fox of Hunterdon County was not related to the Quaker James Fox who settled near Philadelphia in 1685. I have looked through the Quaker records for Burlington in the Hindshaw volume for New Jersey and Philadelphia (see Sources) without success. There was a George Fox who married Susannah Hackney in 1696, but I believe he was connected with the family of James Fox.

George Fox does not appear in the Hopewell Town Book or the Burlington Court Book. There is no estate for George Fox in New Jersey (even though those records begin in 1680). So we have very little to go on.

We do know that on May 18, 1719, George Fox bought 284 acres in Amwell Township from Charles Wolverton, and that is important. For one thing, it shows us that the land was bought by George Fox, born 1662, who was the emigrant to New Jersey rather than his son George Fox, born 1700, for the simple reason that it is highly unlikely that George Jr. would be buying such a large tract of land at the age of 19. The land purchased by George Fox was part of the Biddle tract, on the west side of County Rte 519, north of Rosemont.

The other reason it is important is that George Sr.’s daughter Mary married Charles Wolverton’s son Roger (1700-1748) about the year 1725.* So George Fox became acquainted with Charles Wolverton in 1719 or earlier. Wolverton was among the early Quaker settlers of Burlington, and deserves a post or two of his own. Suffice to say that he was a man of means, purchasing considerable property in Burlington in the 1690s. On March 2, 1714, he bought the right to 1665 acres in Amwell Township from William Biddle, and provided for some of his ten children out of that tract of land.

Roger Wolverton remained in Hopewell Township. As late as 1735 he was an overseer of “Roger’s Road” in Hopewell. That same year he sold his share in the Amwell land to his brother Dennis Wolverton. Dennis Wolverton’s land bordered George Fox on the north. Roger died in Hopewell in 1748; I do not know when his wife Mary Fox died.

The only other mention of George Fox Sr. in the New Jersey estate records is on Dec. 22, 1721 when he witnessed the will of Thomas Harrison of Amwell, along with Samuel Green and Richard Harrison. This is doubly interesting because Charles Wolverton sold land in Amwell to Thomas Harrison the same day he sold land to George Fox.

It is very odd that there was no will recorded for Fox. We can only guess that he died in Kingwood or Amwell sometime after 1721. For his wife Jane Palmer, there is even less information.

* I have been hunting around on the web, looking for a record that would confirm that Roger Woolverton married Mary Fox. Instead, all I found were two conflicting schools of thought. I’ll deal with that in the next post too.