They Cut a Wagon in Half

This is an excerpt from an article by Egbert T. Bush, called “Brookville and Up the Hollow.” Most of that article focuses on the neighborhood of Brookville near Route 29. This excerpt involves an incident that took place closer to Sandy Ridge, so it seemed better to present this part on its own. The rest of the article will be published next month.

They Cut a Wagon in Half

Cyrus Van Dolah tells an amusing story concerning Daniel Butterfoss and his brother Ent. They had a farm wagon built in partnership, each paying half and each owning half. The builders were Henry Van Dolah who did the woodwork, and John Van Dolah who did the blacksmith’s part. The partnership worked very well till it came to the dissolution a few years later. Then there was trouble. Whether merely for sport or just to make people talk or for some other reason does not matter; Daniel demanded a literal and physical division of what was held in common. All efforts to dissuade him were in vain; Daniel would have his “pound of flesh,” for was it not “so nominated in the bond?”

They divided the wagon. Jacob Godown, then wheelwright at Dilts’ Corner, was chosen to manage the sawing and John Van Dolah to cut the irons. Beginning at the end of the tongue, they cut all irons in halves and sawed tongue and reach lengthwise, cutting axles and bounds into equal parts as they went along. Then the king bolt was cut into equal lengths and the body as carefully divided. Daniel had his “pound of flesh” and was satisfied. He set his half leaning against the corncrib at his home, that all might look and wonder. It is not likely that any person now living ever saw it; but Van Dolah had the story from those who had seen the unique exhibition as it stood in Brookville slowly rotting away.

Well might old-timers smile at this, and well may we. And yet it is not a matter for ridicule of either the act or the actor. It merely shows our human tendency to do strange and seemingly inconsistent things at times, and makes us reflect that a thing may look ridiculous largely because the on-looker does not know the controlling factor in the transaction.

First of all, I believe it is ridiculous, even though Mr. Bush tells us not to think of it that way. Below is a photograph of “an old English wagon body”:

Too bad the caption did not identify the two gentlemen. Presumably one of them is William Hillier. I suspect that the man on the right was Cyrus Vandolah. 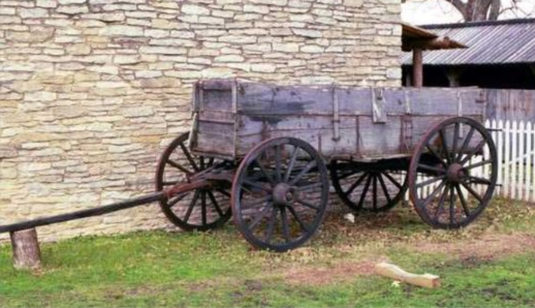 It would be nice to find that bond between the Butterfoss brothers, as it would give us a date for the original transaction and the value of the wagon. After being bisected, its value was certainly reduced. One must wonder what that brotherly relationship was like and what led to the “dissolution” of the partnership. They were the only sons in that family to survive to adulthood, Daniel being six years older than brother Ent. The incident no doubt took place well after their father had died, around 1820, but their mother Esther was still alive, and probably disheartened about this falling out between her sons.

The Butterfoss family was very prominent in the neighborhood of Sandy Ridge in the 18th and 19th centuries, starting with Andrew Butterfoss (c.1710-1759) and wife Anna Moore. I have not identified her parents, but she may have been related to Jacob Moore, who settled not far from Sandy Ridge at a very early date.1 Where Andrew Butterfoss came from I cannot say. His farm was adjacent or very near to the farm of Hendrick Vandolah, the man whose descendants built the wagon in the photograph above, and great grandfather of John Vandolah, who cut it in half.

Andrew and Anna Butterfoss had five children—three sons and two daughters. Daughter Elizabeth married first Garret Lare, and second Philip Dilts. Daughter Ann married Nathaniel McPherson. Their second son John Buttefoss probably died young. Their youngest son Andrew Jr. (1758-c.1850) married Rebecca Johnson and took up residence in Alexandria Township before moving to Pennsylvania in 1797 and returning to Amwell in 1826. In 1840 he was a Revolutionary War pensioner living in Delaware Township, but not in the Sandy Ridge neighborhood.

In 1820, Daniel and Ent Butterfoss were managing to work together, as they were both named executors of their father’s estate, and they were jointly given 60 acres “to be run off the southeast end of the farm where I now live, and they to pay the mortgage.” Daniel Sr. also provided that “son Ent [was] to have all the implements of husbandry on account of his not having had the opportunity of any mechanical trade.” This seems odd, inasmuch as Ent Butterfoss was about 23 years old when his father died.3

It also seems odd that Cyrus Vandolah said nothing about what Ent Butterfoss did with his half of the wagon. He probably had no inclination to display it the way Daniel did. In fact, he sold his part of the Butterfoss farm in 1825 to neighbor Robert Sharp, but that was probably years before the dissolution of the partnership. He seems to have remained living in the neighborhood of Sandy Ridge. In the 1830s and 1840s he was buying small lots in that area.

That neighbor, Robert Sharp, will be discussed in the Brookville article, to be published soon. He married Rachel Ent (1753-1849), who may have been a daughter of Valentine Ent (I have yet to prove it). Robert and Rachel Sharp’s son William married Daniel & Esther Butterfoss’s daughter Esther.

Jacob Godown, the wheelwright, operated his shop at Dilts Corner (intersection of Sandy Ridge-Mt. Airy Road with Lambertville-Headquarters Road). He may have been the Jacob born in 1796 to John Godown and Mary Rounsavel, and who married Ellen or Evelyn Coryell in 1824. He was Chosen Freeholder for Delaware Township in 1847. Unfortunately, he died the next year, age 51, leaving six children. But if this is the right Jacob Godown, then the wagon must have been divided in the 1840s, which would explain why no one around in the 1930s had ever seen it.

Correction (3/11/2018):  I had originally written that the wagon was built by Hendrick Vandolah, which is quite impossible. It was built, as Mr. Bush wrote, by his descendants, Henry and John Vandolah. Thanks to Donna Hay for catching that. Also I made the mistake of dating the Vandolah-Butterfoss wagon to 1795, when that was the date for another wagon, the one built for Samuel Hunt. My apologies.

« A Cricket for a Christmas Guest » Brookville & Horne’s Creek