Camp Ground of the Glorious Old Continental Army in 1777

by Jonathan M. Hoppock
originally published in the Democrat-Advertiser, Oct. 10, 1901

From the photograph and from Hoppock’s description, it appears that this “campground” was located along Route 523 near Sand Brook. 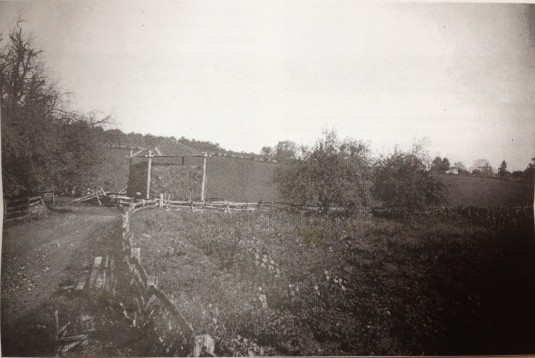 The above cut was a view of the grounds at Sand Brook, showing campgrounds of the Continental Army in 1777. It is now the farm of Hiram W. Holcombe, at which place a part of the Patriot Army was encamped for three days in July of that year.1

This division was under the immediate command of Gens. Stephen and Lincoln. People yet living among us remember many circumstances related by the generation now passed away, who in their youth saw and talked with the soldiers while they were camping at this place, giving a description of their wretched and forlorn condition, many being bare-footed and with scarcely enough clothing to cover their persons, with barely rations sufficient to save them from starvation; many of them sick, several dying in camp, their bodies being interred in an old nearby burial ground, probably the oldest place used for this purpose in this part of our County, as the date on one of the stones is given as 1762.2

The names of these sterling old heroes are now forgotten and unknown, yet here quietly resting in their last bivouac—awaiting the final resurrection roll call unmarked are their graves, yet they gave their lives as a sacrifice to render possible the formation of a government the greatest and grandest that has ever had an existence since governments were instituted among men.

Many relics are still in possession of our citizens which were left by the soldiers upon breaking camp, among them several cannon balls, found at different times by members of Mr. Holcombe’s family. Although, as is well known, no battles were fought by the Continental Army on its march through this part of the State, yet perhaps this movement contributed as much to the success of the American cause as any other event that transpired through that grand old struggle.

Numerous descendants of these old heroes are still living, and they, who manifest no interest in keeping green their memory should be stamped as degenerate sons of illustrious sires. The General Lincoln above referred to had the honor of receiving the sword of Cornwallis from the hands of Gen. O’Hara, at the final close the war at Yorktown, in 1781.

General Adam Stephen (c.1718-1791) was a Virginian, who served under Washington in the French & Indian War as well as in the Revolution. Unfortunately, during an incident in 1777 at Germantown, friendly fire was exchanged; Stephens was court martialled and found to be drunk at the time. General Lincoln was Benjamin Lincoln (1733-1810) of Massachusetts, whose record at Saratoga, the defense of New York and at Charleston won him the position of second in command at Yorktown. He did not take part in the retreat across New Jersey in December 1776, but was back in action by February 1777, attempting to defend Bound Brook. For the rest of the year, Lincoln spent most of his time in upstate New York, and was therefore not present during the army’s journey through Hunterdon County in 1777.

In 2001, the Hunterdon Historical Newsletter featured the photograph (above) from this story, with a short synopsis.3 It included this statement:

“The 1873 Atlas of Hunterdon County shows a G. N. Holcombe residing on a road, presently Britton Road in Delaware Township. In George N. Holcombe’s household in the 1875 State census is Hiram “M.” Holcombe. If this is the encampment location, possibly the farm passed through the family from George N. to son Hiram.”

Indeed that is the case. Hiram Moore Holcombe (1842-1923) was the son of George Nelson Holcombe and Matilda Case. George N. Holcombe died on Dec. 25, 1900, age 92. He was one of 12 children belonging to Robert Holcombe (1783-1825) and Elizabeth Pidcock (1783-1843) and grew up on their farm located on Yard Road. In the 1900 census, George N. Holcombe, age 90, a widower, was a landlord living with his son Hiram Holcombe and family in Delaware Twp. Hiram was identified as a farmer owning his own farm, so whatever land his father was renting, it was not to Hiram. George N. Holcombe was the head of household in 1870, when Hiram was 29 years old. But in 1880, Hiram was the head of household, and his father, age 71, was living with him, a retired farmer, suffering from rheumatism.

The property where the family was living is identified as Block 26 lot 24 in Sand Brook, on the north side of Britton Road in Sand Brook. Interestingly, their neighbor was Hiram Moore.

The property that was eventually owned by George N. Holcombe was originally part of a proprietary tract owned by Elizabeth Estaugh, daughter of John Haddon. In 1748, 1300 acres out of this tract was purchased by Nicholas Sine and Jacob Peter Snyder.4 After selling several lots, in 1749, Snyder and Sine agreed to a division of lands remaining, leaving Nichola Sine (sometimes written Sayn or Signe) with 295 acres.

When Nicholas Sine wrote his will in 1778, he left the residue of his estate (which included his real estate) to his “cousin” (actually his nephew) John Sine, who passed 106.5 acres of it on to his son William Sine in a deed dated May 10, 1796.5 Sine, who married Catharine Hoagland in 1804, wrote his will in 1833, ordering his executors to sell his land, which they did, to George N. Holcombe.

But getting back to Nicholas Sine, he married Urseltje Maul at the Dutch Reformed Church in New York in 1724. He was naturalized in New Jersey in 1730, along with many other German immigrants, including members of the Amwell Church of the Brethren, like Jacob Moore, Rudolph Herley, and Anthony Dirdorf.6 Sine might have joined their church, although I have not seen his name among their members. In 1733 he was sued for debt, and was living on the West Jersey Society’s Great Tract in 1737. By 1741 he was living in Amwell Township, when he listed his earmarks there. He was probably leasing land in the Estaugh tract.

Nicholas Sine did not die until 1781, so we can be fairly certain that he was the owner of the farm where the encampment described by J. M. Hoppock took place. I am intrigued to discover that the army was camping on land belonging to a German immigrant, who, despite living in America for 57 years may have still been speaking German. It would be even more intriguing if Sine was a member of the Dunkard church, since they were pacifists who did their best to stay neutral during the war.

What impact that visit by the Continental Army (if it took place) had on the Sine family’s life must be left to our imagination, but I expect it took them some time to recover.

« The Pittstown Roads» The Amwell Church of the Brethren