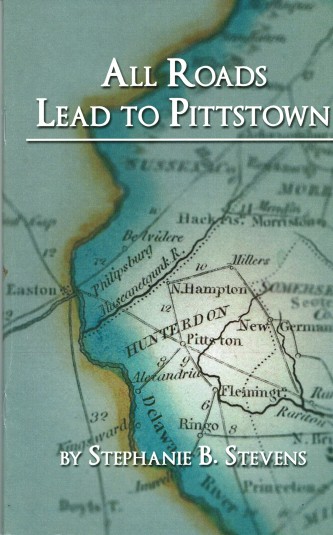 Stephanie began her story with the earliest known settlers there, Charles Hoff and Edward Rockhill. Rockhill leased his mill on the Capoolong Creek to Charles Hoff around 1748. Eventually Hoff went bankrupt and his property was sold to Moore Furman, who was a business partner of one of Hoff’s creditors. Furman was a big deal in old Hunterdon County (serving as Sheriff, and then as Mayor of Trenton for a time). He was living in Philadelphia just prior to the outbreak of war, but he seems to have spent the Revolutionary War years at Pittstown, expanding the milling operation to provide flour and bread for the Continental Army.

It was Furman who gave Pittstown its name, having heretofore been known as Hoff’s Mills. Furman, angered by the Stamp Act of 1765, was grateful to William Pitt for his opposition to the act and for bringing about its eventual repeal. Furman’s active resistance to the Stamp Act and the Navigation Acts earned him the position of Deputy Quartermaster for the Army in July of 1777. Operating from his base in Pittstown, Furman created a lot of traffic sending out his teamsters to haul supplies and food to the army, wherever it happened to be. During the war years, the army was all over the place in New Jersey, so Furman needed practically an army of his own to get the goods to where they were needed.

This is where Stephanie’s roads come in, and her discoveries from the Washington letters are most intriguing. She traces the movements of the army in 1777, from Morristown to Coryell’s Ferry (Lambertville) and Sherrard’s Ferry (Frenchtown). The roads from those places to Pittstown are today Routes 513, 579 and Route 615, which all converge on Pittstown.

Even more interesting is the route that Gen. Sullivan took in December 1776 in an attempt to join up with Washington for the crossing of the Delaware and the attack on Trenton. His army marched from near Basking Ridge to the Potterstown Road in Readington, then at Clinton (Hunt’s Mills) took Route 513 to Pittstown, and from there north on Route 579 to Easton where it crossed the river and marched south on the Pennsylvania side, all to avoid meeting up with the British and Hessians. This army numbered upwards of 5,500 men, plus their baggage and camp followers, so it must have been quite a sight to see them coming through the tiny village of Pittstown.

An important part of the book is the biography of Christopher Ludwig, Washington’s “Baker General.” I never thought about all the loaves of bread and quantities of hardtack it took to feed the army, and Ludwig’s story is pretty amazing. He was a true patriot and deserves more attention than he has gotten. Thanks to Stephanie’s book, that omission has been remedied.

Another nice thing about this book is the wealth of information Stephanie supplies on daily life in the 18th century, like the nature of services provided by taverns, the process of baking bread for an army, and the challenges of foraging for food during the war. Also included are old photographs of Hoff’s tavern, the Furman mill, interesting road maps, and much more.

Stephanie continues the history of Pittstown up through the 20th century, in particular focusing on the impact that John, and later, Hiram Deats had on the village with their manufacturing operations. John Deats got a patent on a new kind of plow that became the standard on 19th century farms. Then in the 20th century, Pittstown became a center for the county’s farmers to transport their peaches to urban markets by way of the railroad that came through town. Another example of roads leading to (and from) Pittstown.

Considering the ground that Stephanie covers in only 44 pages of a 6” x 9” book, this is a very compact history. (Only $7 from either the Hunterdon Co. Historical Society or the Hunterdon Cultural & Heritage Commission.) A must-have for anyone interested in Hunterdon County’s history.

Looking back to those early roads into Pittstown, the fact of the Continental Army traveling from Morristown to Coryell’s Ferry in 1777 lends credence to the claims of Jonathan M. Hoppock that the army traveled down Route 523 heading to Lambertville and briefly encamped near the intersection of Routes 523 and 579 (the neighborhood of Buchanan’s Tavern; see Washington’s Headquarters in 1777). I have never found evidence of such an event. Hoppock wrote that he learned it from his grandfather who was 8 or 9 years old that year. But as I noted in that article, Washington’s army was moving very fast in July 1777, and did not linger in places like Buchanan’s Tavern or Headquarters. But a brief visit at a house that had such a commanding view of the area is quite possible. Perhaps someone’s pension application will supply the answer to this question, if I can ever find it.

Thinking more about the routes that the army took on its way to Coryell’s Ferry, it seems to me that several routes must have been taken, in order to avoid overwhelming the neighborhoods it traveled through. Especially since this was a hungry army, and anything on four feet was likely to be seen as a potential dinner.

While pondering this question, I hunted up a map that was not included in the Stevens book. It was drawn by a Hessian to provide crucial information for the British army. At least I suppose that was the purpose. Oddly enough, according to Paul W. Schopp, the maps were drawn between 1783 and 1789, after the war had ended, so it is hard to know just what the purpose was. Paul wrote that “It is a semi-artistic rendering of the state based on after action reports and field notes/maps. It is not altogether accurate and should not be taken for gospel.”1

It is odd how the roads we are familiar with today do not quite jibe with what was mapped during the Revolution. Take Route 579, sometimes called the Trenton-Easton Turnpike, although it never was an official turnpike. From Pittstown it runs northwest toward Johnson’s Forge and Straw Tavern. Its southern course from Pittstown takes it through Quakertown, as it does today, then south to Buchanan’s Tavern where it intersects with Route 523. But then, instead of going straight ahead to Ringoes as it does now, it appears to take a left turn to something called Chursons tavern where it turns right to Ringoes. How curious.

As for Route 523, beginning at Howell’s Ferry, it runs through Flemington and then on to Whitehouse, as it does today, then further north to New Germantown (Oldwick). And the road from Pittstown to Sherrads Ferry, that is clearly Route 513, running from Frenchtown to Everittstown as the Everittstown Road, and from there to Pittstown, and on towards Bonnell’s tavern in Clinton, passing by “Hen Parker” (James Parker) and Charles Cox. At Clinton it intersects with the road from Potterstown to Hickory Tavern. Today the location of the old tavern would be at the intersection of Route 579 and Hickory Corner Road. It was originally a log house built in 1769, but was replaced by a large frame house in 1800.

The road that turns southeast from Pittstown to run through Whitehouse and “Reading Meeting” (the village of Readington) must have started off as the Cherryville Road, then a right turn down the Klinesville Road (Rte 612) to Bartles Corner then on to Route 523 north to Dreahook and then southeast to Readington. A pretty tortuous route.

What Routes Did They Take?

So, first question, how did the Pittstown teamsters travel to get the thousands of loaves of bread and hardtack biscuits to the army at Coryell’s Ferry? The logical thing it appears was to travel down Rte 579 from Quakertown to Buchanan’s Tavern, then pick up Rte 523 toward Howell’s Ferry and take what is today the Sandy Ridge-Mt. Airy Road to the Old York Road (Route 179) and from there to Coryell’s Ferry. (See The Amwell Road for more on this route.)

Another possibility would be to go from Pittstown to Sherrard’s Ferry, then south on today’s Route 519, another very old road, to Howell’s Ferry, then up 523 to pick up the Sandy Ridge-Mt. Airy Road.

A third possibility would be to go straight through Quakertown and pick up today’s Route 31 north, then down through Flemington to intersect with the Old York Road. So many alternatives.

Second question: What route did the several branches of the Continental Army take on their journey from Morristown through Potterstown to Coryell’s Ferry?

Most obvious route would be east to “Hozzets” (what was that?) where they would pick up Route 523 south through Flemington, then following the above-described route from Howell’s Ferry or south to the “Old English Church” in Reaville, then south on the Old York Road. But it would not surprise me if a part of the army marched from Potterstown to Bonnel’s tavern, and from there to Pittstown before taking one of the several routes to Coryell’s Ferry from there.

All this goes to show that in 1777, western Hunterdon County had a lot of military traffic passing through. At the time it must have been a major disruption for the people living along the various routes, and yet today, all evidence of that march seems to be gone. Oh, the evanescence of history.

2/28/16: Originally I did not have information about the date and purpose of the Hessian Map. That information has been added. I also learned after publication that the Stevens book can be purchased at the H. C. Cultural & Heritage Commission for $5, rather than $7.

« The German Baptist Church in Amwell» A 1777 Campground