This article is meant as a companion to the article by Egbert T. Bush, “The Daybooks of Dr. Bowne.” In this article, Mr. Hoppock goes on at some length about the first owner of the Bowne farm being Jacob Moore. Unfortunately, he was mistaken. As Mr. Bush wrote, Jacob Moore settled on what later became known as the Wagner farm (at Haines and Wagner Roads). The Bowne farm was first settled by Peter Moore, but Mr. Bush does not say when he settled there. It was certainly early, because Peter Moore’s executors (his three sons) sold the farm to Dr. Bowne in 1795.

by Jonathan M. Hoppock
published in the Democrat-Advertiser
July 6, 1905 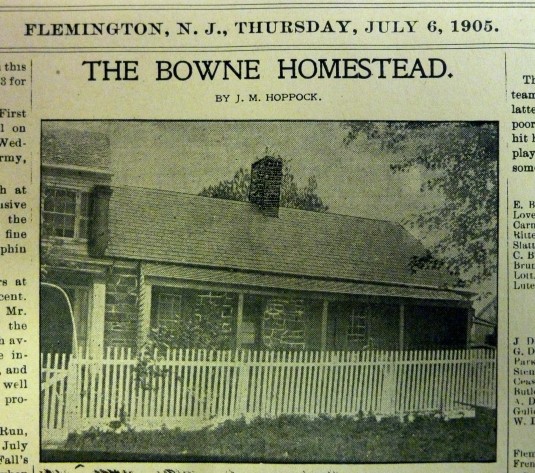 The above illustration shows the mansion once owned by the noted Dr. John Bowne. It is situated near Bowne’s Station, on the Flemington branch of the Pennsylvania Railroad, and now owned by Mr. Archibald Trout and occupied by his son, Frank Trout.

The old homestead upon which the house stands was originally owned by Jacob Moore, a Hollander, who erected the first dwelling or log cabin upon it about the year 1770. Moore came from his native country to New York, seeking a home in the new world. Securing his title for the land from the Royal governor, he left New York to commence his labors, and while erecting his cabin and clearing his land he passed the first winter upon his newly acquired tract with a hollow tree for a dwelling.

Returning to New York he brought back with him a wife—a girl who left her native home in the same ship in which he crossed the ocean. Tradition has it that the first wheat ever sown and gathered in this part of the county was harvested on this farm by the industrious old Hollander. For these facts we are indebted to Mrs. Lydia Moore Abbott, one of his descendants.

Dr. Bowne who became the owner after the death of Jacob Moore’s widow, was born in Monmouth County, N.J., Sept. 2, 1767, on the farm owned by his father and upon which the battle of Monmouth was fought. The Doctor, then a lad of eleven years, was an eyewitness of the conflict, and loved in after years to talk of the many incidents connected with it, notably, the death of Colonel Monckton, the heroic deeds of Molly Pitcher, and the death of a sergeant of grenadiers in the British army known as the “High Sergeant.” He was the tallest man in the British army, measuring seven feet four inches in height.

The Doctor, after receiving a common school education, prepared for his professional studies in the academy at Freehold, from which he received a diploma signed by John Woodhull, D.D., and other officers of the institution. He read medicine with Dr. Moses Scott, of New Brunswick, and was licensed to practice medicine and surgery in this State on August 3, 1791, by James Kinsey and Isaac Smith, Justices of the Peace of the Supreme Court of New Jersey, on the certificate of Drs. John Ab De Normandie and Francis Brown Sayre. He located at Prallsville (now Stockton) in the autumn of 1791, shortly afterward moving to the farm above described, where he lived for sixty-one and one-half years. For the foregoing and following facts we are indebted to Doctor John Blane’s History of the Hunterdon County Medical Society.

Dr. Bowne was a most remarkable man. Although of small stature, he was blessed with a very robust constitution. He was a man of the most indomitable energy, untiring industry and great perseverance. His practice in his palmiest days extended over an area of more than twenty miles long by six miles wide, at a time when public roads were few and far between, his labors being performed principally on horseback.—He might at all times and seasons of the year, in fair weather or foul, be seen emerging from his gate at the earliest dawn, on his daily visits to his patients. As a physician he was bold and at the same time a sound and judicious practitioner. He had the most perfect reliance in the efficacies of his remedies, and administered them without faltering and with such bearing as secured for him the confidence of his patients, among whom his word was law; a violation of which was soon to be visited by such reproof as prevented a repetition. He possessed the regard and esteem of his professional brethren in a most unbounded degree. Careful never to overstep the bounds of professional discretion in his intercourse with his brethren he would never brook such breaches in others. The character of Dr. Bowne as a citizen, companion, friend and Christian was that of a high-toned gentleman, very genial in his intercourse with those into whose presence he was thrown, very fond of his joke, quick at repartee, close and untiring in his friendship, and an humble christian, always to be found in his seat at the sanctuary unless kept away by professional duties.

Fond of his joke as the Doctor was he sometimes was matched by a quick-witted patient. It is related that on one of his professional visits to a son of the Emerald Isle, named Matthew Thompson, who was a weaver and fiddler, on entering the sick room the Doctor, imitating the Irish brogue, remarked:

“Well, Mather, you still wave (weave) a leetle (little) and faddle (fiddle) a leetle,” when quick as a flash came the reply: “And Docther (doctor), it’s yerself that still kels (kills) a leetle and cures a leetle, is it?”

Dr. Bowne was the father of Hon. Gardner Bowne, member of the New Jersey State Senate from 1868-70.

His remains are interred in the Barber Cemetery, marked by a beautiful obelisk of Italian marble upon which is inscribed the following:

The farm of Dr. Bowne has been discussed recently on this website under the title “Query: Trout Farm,” although at the time I did not realize it was the Bowne farm. Lora Olsen, clerk for West Amwell Township, had provided a photograph of the home of her Trout ancestors, who acquired the farm after the death of Dr. Bowne’s son, Joseph G. Bowne in 1888.

The photograph shows a farmhouse that does not resemble the one pictured above in the Hoppock article. According to Lora Olsen, there were two houses on the property, one dating to 1720, the other to 1850. I suspect the later house is shown in this picture.

In his article, “Let’s Stop Off at Bowne Station,”1 Mr. Bush wrote:

“After Dr. Bowne’s death, his son Joseph G., locally always “Gardner Bowne,” State Senator from Hunterdon County, 1868-70, owned and operated the farm as long as he lived. John O. Bowne and Edward B. Holcombe, executors of Joseph G. Bowne, sold the farm to Joseph H. Bowne in 1889; and Joseph H. Bowne and others sold it to Mary M. Trout in 1893. She devised it to her husband, Archibald Trout, for life and then to go to their son, Frank L. Trout, who sold it and moved to Baptistown, N.J.”

Archibald Trout (1836-1915), son of Asher Trout and Harriet Buchanan, married Mary Lee (1833-1914), daughter of Joseph G. Bowne, in 1857. Frank L. Trout was their son. So the Bowne farm stayed in the family until Frank Trout sold it. At least I think it did. The marriage record identified Mary as Mary Lee, not Mary Bowne. I will have to look up the will of Mary Lee Trout to see if this mystery is explained; also the will of her supposed father, Joseph G. Bowne in 1888. The fact that Joseph H. Bowne sold the farm to Mary M. Trout instead of her husband makes me think there was a family connection.

Joseph H. Bowne was probably the son of John M. Bowne and Mary S. Barber, and grandson of Hon. Joseph G. Bowne, and nephew (I think) of Mary Lee Trout. He was only 7 years old when father died in 1863. He left home in the 1870s and moved to Brooklyn, New York, married, and then relocated to East Orange, N.J. In other words, he was not interested in running a farm.

For more information on the family of Archibald Buchanan Trout, see the Query article (from the link above) and also the Buchanan Tavern articles (link in the sidebar), since Archibald Trout was the great grandson of the first John Buchanan.