In celebration of this year’s Fourth of July, it seems appropriate to reprint (in two parts, and slightly updated) my article published in the Hunterdon Historical Newsletter, in the Spring issue of 2006 (pp. 981, 983-87).

On July 4th, 237 years ago, Congress adopted the Declaration of Independence. (Congress declared independence on July 2nd, adopted the Declaration on July 4th, and the delegates began to sign the document on August 2nd). This year, as in every year since then, Americans will celebrate with Fourth of July parades, and some will even listen to a reading of the Declaration. Among other things, what we celebrate is the knowledge that our country was built on very sound, if somewhat flawed, foundations, and that the government established so long ago has succeeded admirably. Not perfectly, but admirably. 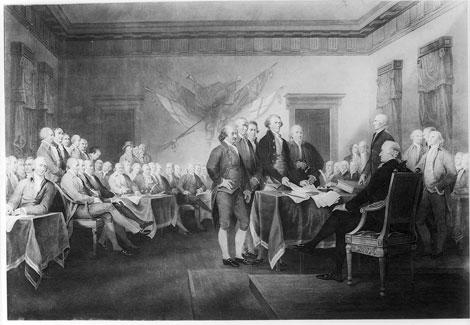 In 1826, people were not so certain of their government. The 50th anniversary of the Declaration was almost a surprise to many who wondered if the country could succeed. A democracy based on a federal system was a daring experiment. So, when people realized that the Jubilee was approaching, they knew they really had something special to celebrate.

By 1826, Fourth of July celebrations were already a well-established tradition, beginning with the first one in Philadelphia in 1777, and a ritual seemed universally accepted: a parade accompanied by “bands of music,” from the courthouse to the church where a local or visiting minister would give a sermon, songs would be sung, a specially chosen person would read the Declaration, the minister would give his benediction, then everyone would parade back to the center of town and disperse, some to their homes, others to a hotel for a “handsome repast” followed by toasts. All would then go home feeling they had shared in the expression of patriotic feelings and appreciation for their exceptional country and for the sacrifices made to create it.1

Such was the case in Flemington and Lambertville in 1826. Thanks to Charles George, editor of the Hunterdon Gazette and Farmers Weekly Advertiser, we have a record of that celebration.2 And thanks to the hard work of Bill Hartman and his volunteers, we have ready access to that record on CD.3

Charles George came to Flemington to commence publishing a newspaper in 1825. He had been running a printing shop in Philadelphia, and it is likely that he was invited to Flemington by a group of men who met in February 1825 to discuss the need for a paper in town.4 The first issue of his “Hunterdon Gazette” came out on March 24, 1825, which gave George a few months practice before the 1825 July 4th celebration, and that event gave him some preparation for covering the far more important one in 1826.

That year, on June 5th, some citizens met “at the house of” Mr. Smick in Flemington to prepare.5 Peter Smick had just taken over the tavern of Charles Bonnell in May.6 It was located on Main Street where the Post Office now stands.7 The group met to name a “Committee of Arrangements” to plan for the upcoming big day,

“to make such arrangements as they shall deem requisite for celebrating the day in a manner corresponding with the magnitude of the cause which gave it existence. Messrs. P. I. Clark,  Wurts, and Miller were unanimously appointed the committee, and have already commenced preparations for a splendid celebration.”

The readers of the Gazette would have known immediately who Messrs. P. I. Clark,  Wurts, and Miller were. That is no longer the case, so a little background is helpful here.

Peter I. Clark (1790-1863, son of Rev. Joseph Clark and Margaret Imlay) was an attorney who came to Flemington from New Brunswick in 1815 and had become prominent, probably thanks to his “noble, commanding presence, frank and genial countenance, rich, musical voice, courteous dignity, and suavity of manner.”8 In years to come he was an active supporter of Andrew Jackson, the Hunterdon militia, the Flemington Presbyterian Church and the Hunterdon Bible Society. He delivered an oration when the cornerstone was laid for the new courthouse in 1828. He was the county prosecutor from 1828 to 1832, and was elected to the Legislative Council in 1831-32. In 1826 he was 36 years old.

Alexander Wurts (1799-1881, son of John Wurts) was born in Morris County and graduated from the College of New Jersey (Princeton University) in 1815. He studied law and then moved to Flemington to practice it.  He also became involved in politics and was elected to the NJ Assembly in 1824.9 In 1823, he was named an executor of the estate of Joseph Bonnell Esq., a very prominent and wealthy Flemington lawyer who died at the age of 30. A few years later, in 1831, Wurts married Bonnell’s sister, Mary. In 1826, Wurts was 27 years old.

Also 27 years old was Andrew Miller, born in Somerset County in 1799. After being admitted to the bar in Somerset, he came to Flemington about 1824 “taking the place {probably the office} of Joseph Bonnell, then recently deceased.”10 In September 1826, Miller joined Charles George and Rev. John F. Clark, Presbyterian Minister of Flemington, to open “a Classical School” called the Flemington Academy.11 He served on the Board of Freeholders in 1833.

What is interesting about these three men is that they were all attorneys who had been born outside of Hunterdon County, but had come to Flemington between 1815 and 1824. One historian has described how “county seats in New Jersey . . . provided focal points for the flow of political information and resources, and they attracted men who aspired to public office and professional achievement.”12 This was especially true in the years following the War of 1812 when the economy was expanding again. These three men are good examples. And Charles George might be added to the group, even though he was not a lawyer.

Although Flemington was the county seat of Hunterdon, it was part of the much larger township of Amwell (consisting of present-day Flemington, Raritan, Delaware, East & West Amwell, Stockton and Lambertville). Back in 1808, “Flemington was but a small village. From the Presbyterian church to the Baptist there were but sixteen houses, of which three were occupied as taverns.”13 It was just beginning to change by 1826.

A week after their meeting, the committee of arrangements announced in the Gazette its plan for the day. It was quite explicit, beginning with a salute of 50 guns at sunrise. The procession was to assemble at 11 o’clock in front of the “house of N. Price” (Gen. Nathan Price), at the corner of Mine and Main Streets.14

The Marshal for the day was John T. Blackwell, Esq., another lawyer, who came to Flemington with his family from Hopewell about 1800, at about the age of 28. He quickly became prominent, being named to the Court of Common Pleas by the legislature in 1804 and 1808. In 1810 he became the County Clerk, a position he held until 1829. In 1811 he was named Surrogate and held that position, concurrently with that of County Clerk, until 1818. By 1826, he was in his 50s, semi-retired and highly esteemed.

As planned, the celebration began with the ringing of “the village bell, the display of the National Flag, and a salute of 50 guns.” At 11 a.m., 42 Revolutionary War veterans (including two black men, Lewis English and Jacob Francis) “reported themselves to the Committee of Arrangements.” They were given badges of broad white ribbon, stamped with the American Eagle, and the words and figures ‘Survivors of 1776,’ {which} were affixed to the left button-hole of their coats.” The Gazette listed the names of the veterans as follows, with dates and home towns added, if known:15

These gentlemen, who ranged in age from about 65 to 90 years, decided who would carry the banners (those carrying banners had participated in the battles they represented). They also chose “officers for the day,” Samuel Barber, Esq. and Capt. Tunis Case, both of Amwell/Delaware. The veterans then proceeded to the courthouse to await the parade.

This is the first half of the article published in the Hunterdon Historical Newsletter. The second half can be found HERE.

Postscript: The tavern of Nathan Price

There are two questions to answer regarding Nathan Price: 1) did he run a tavern? and 2) where was it? Writers have stated there were three taverns in Flemington: the northern one near the Presbyterian Church run by Elnathan Moore, the middle one owned by Charles Bonnell and taken over by Peter Smick, and the southern one owned and run by Neal Hart, later called the Union Hotel. Yet newspaper references to “the house of Gen. Nathan Price” are frequent. The Hunterdon Brigade Board met there every year from 1831 to 1838, and the Trenton & Flemington Mail Coach left Flemington from the house of Nathan Price, innkeeper. In the March 4, 1832 issue of the Gazette, there is a notice from Thomas Stout that he is moving “to a large and commodious shop now erecting on the corner lot of Samuel Hill, Esq. immediately next Gen. Price’s tavern.” So we must conclude there were four taverns in Flemington.

Determining just where the house of Gen. Price was located has proven difficult. There are no deeds showing his purchase of land in Flemington; presumably, after retiring from his tavern business in Ringoes, he rented a house in Flemington. According to the 1822  map of Flemington16, Samuel Hill’s pottery was located at the southwest corner of Main and Mine Streets, and his large house was a short distance south on Main Street. The only tavern license for Nathan Price at the Hunterdon Archives is one dated 1829 for a tavern “where I now dwell at the new establishment called Saxton’s corner in the village of Flemington.” The 1822 map shows Nathaniel Saxton living just north of the intersection of Mine and Main, which must, therefore, be “Saxton’s corner.” I still cannot say exactly where Price’s tavern was, but that intersection of Main and Mine is close enough.